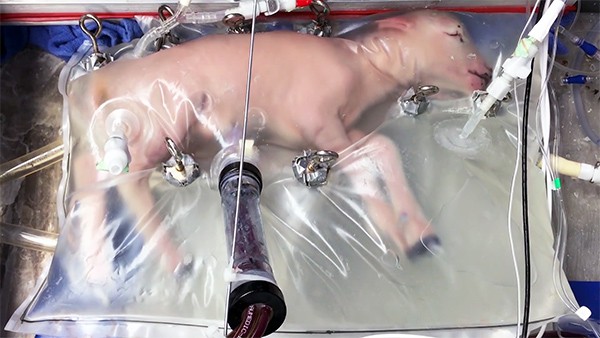 Eight fetal lambs were successfully developed to term in artificial wombs at The Children’s Hospital of Philadelphia Research Institute, in a study whose results were published last week in the journal Nature Communications.

They were equivalent in human terms to 22 to 24 weeks of gestation at the start of the experiment, providing a potential template for the care of extremely premature infants, who represent about 6 percent of premature births in the United States, which make up about 10 percent of all births.

The remarkable feat was accomplished through the use of “Biobags” that mimic the natural conditions of a uterus:

The Biobag may not look much like a womb, but it contains the same key parts: a clear plastic bag that encloses the fetal lamb and protects it from the outside world, like the uterus would; an electrolyte solution that bathes the lamb similarly to the amniotic fluid in the uterus; and a way for the fetus to circulate its blood and exchange carbon dioxide for oxygen.

For decades scientists have been trying to develop an artificial womb that would re-create a more natural environment for a premature baby to continue to develop in. One of the main challenges was re-creating the intricate circulatory system that connects mom to fetus: the mom’s blood flows to the baby and back, exchanging oxygen for carbon dioxide. The blood needs to flow with just enough pressure, but an external pump can damage the baby’s heart.

To solve this problem, [Alan] Flake and his colleagues created a pumpless circulatory system. They connected the fetus’s umbilical blood vessels to a new kind of oxygenator, and the blood moved smoothly through the system. Smoothly enough, in fact, that the baby’s heartbeat was sufficient to power blood flow without another pump.

The next problem to solve was the risk for infections, which premature infants in open incubators face in the neonatal intensive care unit, or NICU. That’s where the bag and the artificial amniotic fluid comes in. The fluid flows in and out of the bag just like it would in a uterus, removing waste, shielding the infant from infectious germs in the hospital, and keeping the fetus’s developing lungs filled with fluid.

The fetal lambs were moved to ventilator systems when they were ready and continued to develop normally, with organs’ growth near or at where they should be in a normal birth. The encouraging outcomes have led the scientists involved to already look forward to more ambitious attempts that introduce further criteria to more closely resemble human gestation.

Previous Post: « Donald Trump Clucks After House GOP Passes Trumpcare Bill That Will Devastate Millions of Americans: WATCH
Next Post: The French Have Been Desperate for Obama to Get Involved in Their Politics. He Just Did: WATCH »