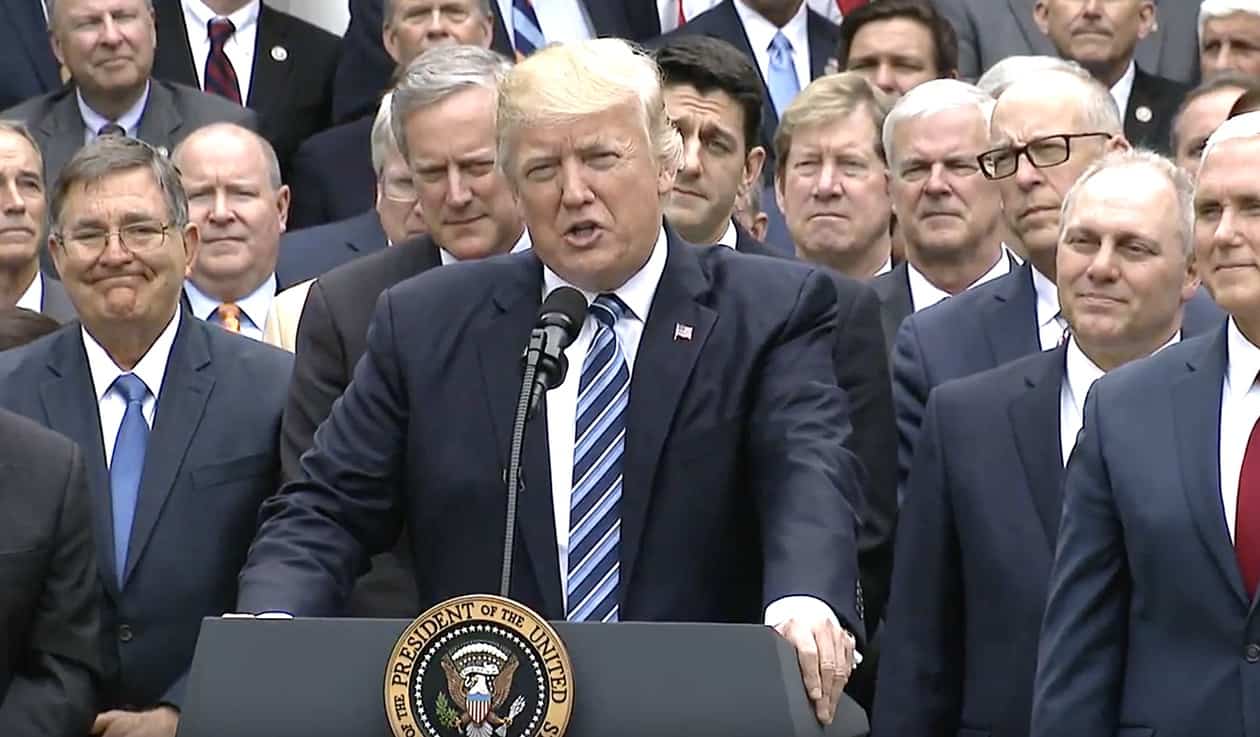 Said Trump: “Coming from a different world and only being a politician for a short period of time — How am I doing? Am I doing okay? I’m president! Hey! I’m president! Can you believe it, right?”

The NYT looks at the winners and losers with the Trumpcare bill.

With the 217-213 vote, Republicans obtained just enough support to push the legislation through the House, sending it to the Senate for consideration. No Democrats voted for the bill.

The legislation is by no means sure thing in the Senate, where the Republicans hold a slender 52-seat majority in the 100-seat chamber and where only a few Republican defections could sink it…

…As Republicans crossed over the vote threshold to pass the bill, Democrats in the House began singing “Na na, na na na na, hey hey hey, goodbye,” a rowdy suggestion that Republicans will lose seats in the 2018 midterm elections because of their vote.

While the Congressional Budget Office has yet to score this version of the legislation, a previous projection estimated the legislation will result in 14 million Americans losing their health insurance by 2018. That number skyrockets to 24 million by 2026.

“Donald Trump and his allies in Congress are one step closer to ripping away care from millions of people, with a particularly devastating impact on low-income senior citizens, women, children, LGBTQ people, and people living with HIV,” said HRC Government Affairs Director David Stacy. “It is unconscionable that Congress might restrict vital health care for the very people they represent. With people’s lives on the line, we urge the Senate to stop this madness and reject this harmful piece of legislation.”

The AHCA undermines core provisions of the landmark Affordable Care Act (ACA). As a result of the ACA, thousands of low-income people living with HIV have been able to obtain health insurance through the Medicaid expansion. This critical coverage ensures that people living with HIV have access to lifesaving treatments. The AHCA’s drastic changes to Medicaid will likely strip these people, and other vulnerable populations, of essential healthcare coverage.

In order to get the votes necessary to pass the AHCA, the Republican majority added an amendment by Rep. Tom MacArthur (R-NJ) which allows states to opt-out of offering the essential health benefits — a core component of the ACA. Another amendment by Rep. Fred Upton (R-MI) provides an additional $8 billion to aid states in funding high-risk pools for individuals with preexisting health conditions. However, many states previously attempted to contain runaway health costs by using high-risk pools before the passage of the ACA, only to shut them down because they could not afford to sustain them.

The tax credit structure embedded in the proposed health care act leaves behind thousands of low-income individuals and families who will be priced out of coverage. Systemic discrimination of LGBTQ Americans leaves them with some of the lowest rates of insurance coverage in the nation. The LGBTQ community has benefitted from the ACA’s tax credit structure and the Medicaid Expansion, and the rescission of both of these critical components will have devastating consequences for a community already facing significant health care disparities.

Beyond repealing these key provisions of the ACA, the AHCA would also cut federal funding for Planned Parenthood, which could jeopardize the ability of clinics to deliver preventive health services, including HIV testing and transition-related care. The ACA’s public health and prevention fund, established to expand investments in the nation’s public health infrastructure, would also be repealed. Health centers, like those operated by Planned Parenthood, often offer the only culturally competent healthcare available, especially in rural and isolated areas.

In considering the ACA in 2009 and 2010, the House held 79 hearings over the course of a year, heard from 181 witnesses and accepted 121 amendments. The current House leadership has moved this unacceptable repeal and replacement legislation through the House in a matter of weeks. The Senate adopted the ACA only after approximately 100 hearings, roundtables, walkthroughs and other meetings, and after 25 consecutive days in continuous session debating the bill.