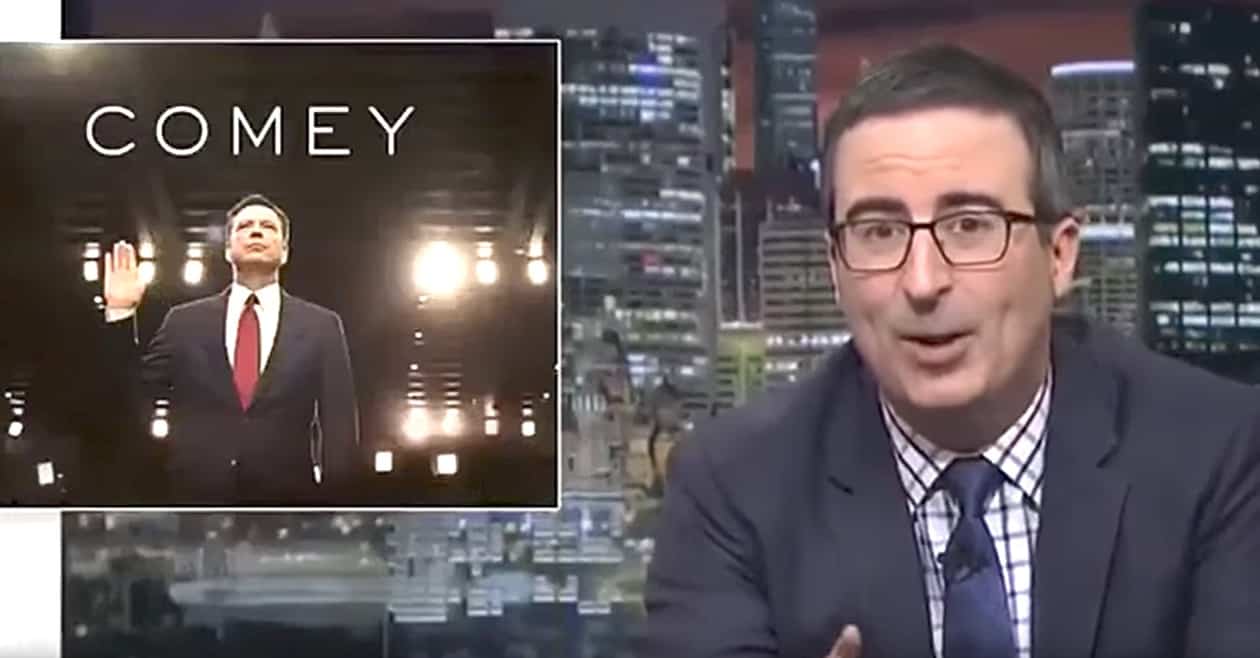 Oliver launched the segment with Comey’s criticism of Trump’s attacks on the FBI and Comey’s standing within it, labeling Trump a liar and calling the attacks “lies, plain and simple.”

“Trump’s lies are never plain and simple. Each one is like an everlasting gobstopper. You’ll never make it through every layer because it was produced by an insane person who should never be in charge of anything.”

“He is describing his meeting with the president like a person who thought he was about to be murdered. All of a sudden, we were alone, so I texted my location to a friend and tried to get some of his DNA under my fingernails.”

And the details of the dinner where Trump allegedly asked for Comey’s loyalty:

“He was tricked into a one-on-one dinner with Donald Trump, which is definitely not the first time that that has happened. Comey is just lucky that Trump didn’t try the old hole-in-a-bucket-of-popcorn trick.”

Said Oliver:” Just think about what he’s saying there: Trump is essentially claiming that he’s been vindicated by testimony that he’s claiming is false. At this point, he’s become a walking logical paradox. I honestly wouldn’t be surprised if he just starts tweeting things like, ‘I just traveled back in time and killed myself.Very unfair!’”

“There are so many problems with what he just said, but the main one is that there are undeniable times when the excuse ‘he’s new to this’ is fair: If you work at a daycare and on your first day you mix up the three Olivias, no big deal. You’re new here. But if on your first day you set up a Baby Fight Club, that is not OK and you should have known that before you started. And a president attempting to shut down an investigation into a subordinate is pretty firmly the latter option here, and you want their supervisors to look into that—even if the first rule of Baby Fight Club is you can’t talk about Baby Fight Club in an open setting.”

Previous Post: « John McCain Went There: Longtime Arizona Senator Says the U.S. was Better Off with Obama as Leader
Next Post: LA Pride Parade Goes from Party to Protest: VIDEO »