You are here: Home / Meanwhile, In Westeros: Pies, Pus and Pirates On ‘Game of Thrones’ [RECAP] 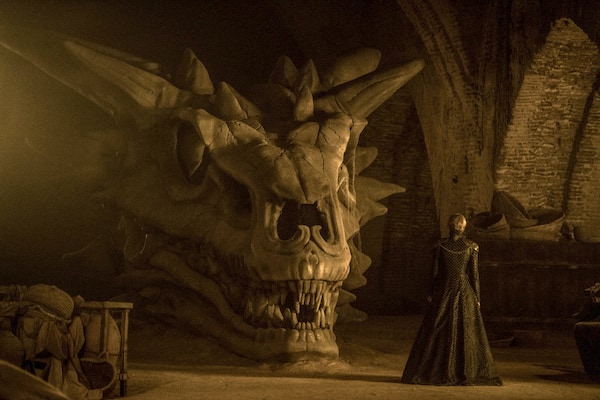 It’s insane how much development Game of Thrones crammed into last night’s workhorse of an episode. Allegiances and motivations were mostly laid bare, and characters were forced to confront what the choices they’ve made in the past mean for them now that the game is changing so quickly.

After an episode heavy on chatting through what side folks are landing on in the coming war, the first real blows were dealt. Which side is taking an early lead in the battle for the Iron Throne?

Let’s discuss in our recap, below! 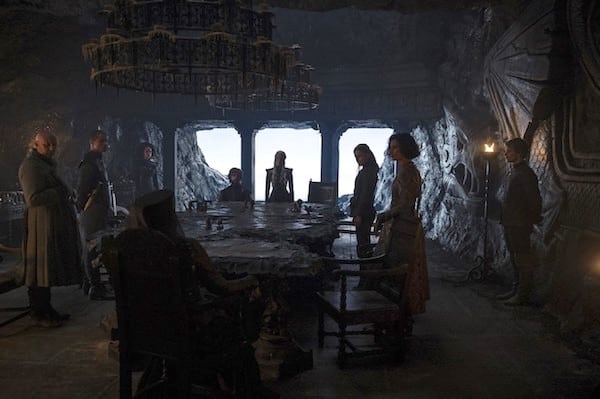 It was a dark and stormy night, much like this one, when Daenerys was born, or so she’s reminded by Varys and Tyrion as they review strategy. Of course, Daenerys is less interested in the past than she is in the future, growing more and more anxious by the day to shove Cersei off that Iron Throne and rule the Seven Kingdoms. She’s got an army, she’s got dragons, what’s the hold up?

Tyrion mansplains that if she takes the city by force, all that will be left to rule will be ashes. It’s a good point, but not a very satisfying answer for the Dragon Queen. Next, she turns her attention to Varys, a schemer of the highest order. Why should she trust the Spider after all the conspiring he’s led against his former rulers? After all, wasn’t he the one caught up in a plan to get her murdered?

Now, to be fair, Varys reminds her, he barely even knew her when he tried to have her murdered, so, like, let’s let bygones be bygones. Dany, however, isn’t convinced. She demands loyalty. Varys can’t promise that, but he promises to be honest. Honest loyalty, if you will.

Unlike Littlefinger, whom we’ll get to shortly, Varys’ meddling is guided by his values. He wasn’t from a rich house, he grew up with nothing. He works for the people. He turned on rulers when they lost their way. He’s backing Dany now because he believes she is the best for the people. Khaleesi is satisfied with this answer, but she asks that if she does stray from what the people needs, he tells her to her face instead of plotting to kill her behind her back. Deal.

Then Varys rushes away to put all this in a memo in case he needs to testify about it later.

Of course, there’s a knock on the door. A caller at this hour? Whomever could it be? It’s Melisandre, in her full drags, looking like her enchanted, easy, breezy, beautiful self. Despite having boinked Stannis in this very castle, Dany gives her an audience since e’erybody’s already getting pardoned tonight.

The most important part of their conversation lies in a little translation error in the great prophecy about the “prince” that’s been promised may not be a prince at all. Missandei helpfully tells them that the High Valyrian word used is gender-neutral, so really it’s the “prince or princess” that’s been promised. Could Dany be Azor Ahai? Maybe! But it seems Melisandre has learned her lesson about taking all this too literally. Dany has a role to play, Mel says, but so does Jon Snow.

“Hey, I know that guy!” Tyrion chimes in. Regardless of Melisandre’s hocus pocus, having an ally in the North would be beneficial. Dany sends him a raven asking him to pay a visit, and to bend the knee. 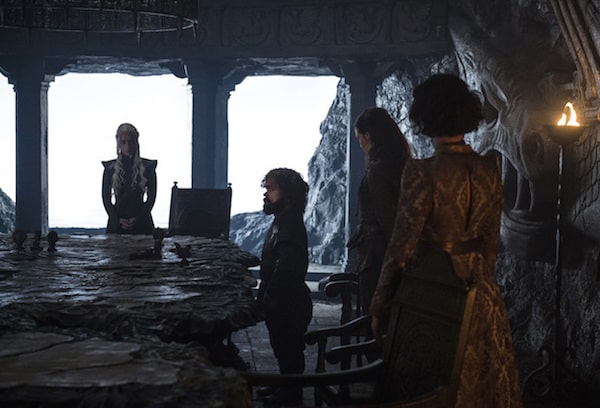 Later, Dany gathers Olenna, Ellaria, Yara and others to strategize. The plan is for the Unsullied to take the Lannister’s home, Casterly Rock, while the Tyrell and Dornish armies surround King’s Landing and starve everybody out. Yara and her fleet will escort Ellaria and her Sand Snakes to pick up the army and bring them back. Go team!

The room clears, save for Dany and Olenna. The elder Tyrell warns Dany about trusting Tyrion — or any man, for that matter — over her own instincts. Olenna has known many clever men like Tyrion, and she’s outlived them all by ignoring them. People need to fear her, not love her. People loved Margaery, and it didn’t help her a bit. Dany isn’t a sheep, she’s a dragon. She needs to act like one.

As everyone readies for battle, once again Greyworm and Missandei need to reckon with the fact they may never see each other again. Greyworm confesses that he has a hard time opening up to people because the Unsullied are trained not to have weaknesses. “But I can fix him!” Missandei seemingly screams. So, she undoes her dress, takes off his clothes and serves him her, uh, hot pocket? (Next month in Teen Vogue: How To Please Your Man, Even If He’s Castrated) 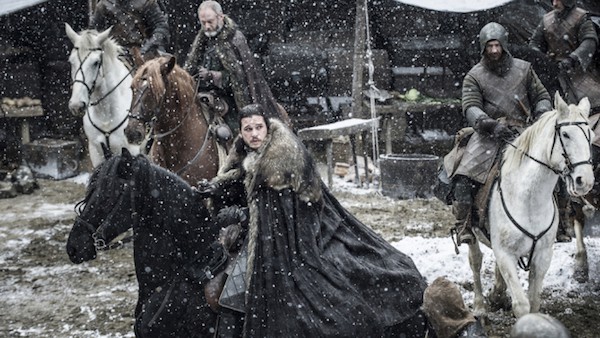 Jon receives the message from Dragonstone. He trusts Tyrion dating back to their trip to the Wall, and even Sansa speaks highly of him from her otherwise awful time at King’s Landing. Still, a Targaryen arriving with dragons to take Westeros isn’t the most soothing thought. Sansa fears it’s too dangerous for Jon to make the trip. However, the decision appears to be made once Sam’s message arrives telling them about all that Dragonglass at Dragonstone. (As an aside: How did Dany’s message get there before Sam’s? Are there express ravens? Next-day ravens from Amazon Prime?)

Anyway, despite some pushback from the other lords of the North, Jon tells everyone he’s going. Dragonstone has Dragonglass, which kills White Walkers; as does fire, which Dany’s dragons could certainly provide. In the interim, Sansa is in charge. This will go well, I’m sure.

Before he rides off with Ser Davos, Littlefinger sidles up to Snow in the crypt. He confesses his love for Sansa, which is gross, and also, like, what sort of reaction is he expecting? Does he think Jon is going to bless their union? Nah, brah. Jon reacts like any cliché older brother and threatens to kill Littlefinger if he tries anything. Sure, sure. Again, this will go well while you’re gone, I’m sure. 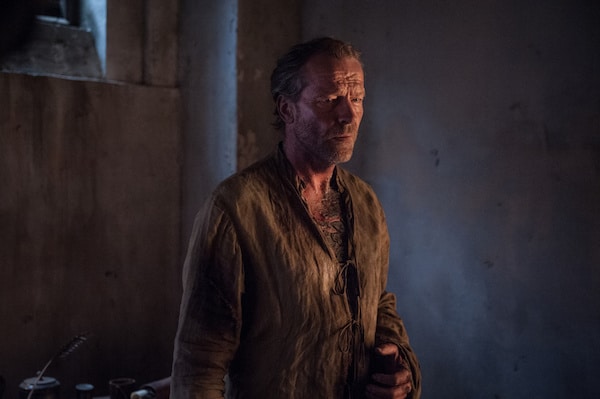 Meanwhile, at the Citadel …

The Citadel scenes are turning into straight-up episodes of Grey’s Anatomy now. The archmaester is Bailey, Sam is Kepner and the medical oddity of the week is Jorah. Turns out, Jorah has plenty of time to live with greyscale. The archmaester gives him a relatively positive prognosis of 10-20 years, but unfortunately he’ll lose his mind in about six months.

It’s not until this point that Sam learns Jorah’s identity, realizing that he knew Jorah’s father from his time in the Night’s Watch. That changes everything.

Instead of Kepner, Sam goes full Izzy, attempting a risky procedure the archmaester had already told him was forbidden. Sam shows up in Jorah’s cell with a bunch of rum and surgical instruments, and he begins hacking off the greyscale amidst so much blood and pus and muffled screaming. 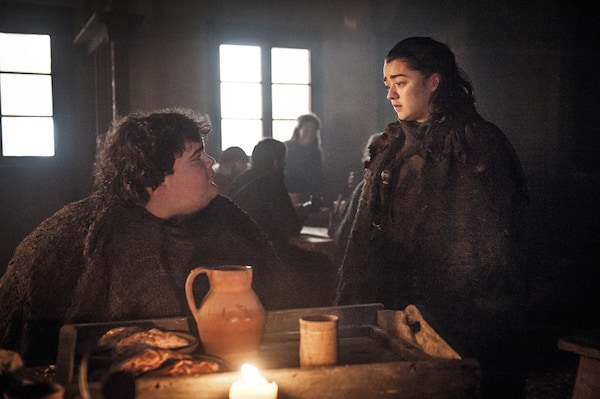 Meanwhile, in the Riverlands …

Arya is sitting down for a hot pie when who else but Hot Pie shows up. He gives her a little recap on what she’s missed while she was away training to be an assassin and ripping off faces. She had no idea that the Boltons were no more and Jon Snow was ruling Winterfell. You can see a glimmer of the old Arya flicker in her eyes. Now, she has a choice: Continue on her path of vengeance or go home.

Outside, she mounts her horse and turns in the opposite direction from the men riding to King’s Landing. Her choice, it seems, has been made.

On the way, she stops to build a fire, and she’s beset by wolves. Not just wolves, though. It’s a pack of wolves led by her direwolf, Nymeria! The reunion we’ve been waiting for is finally here, but it doesn’t play out exactly how you’d expect. Nymeria doesn’t immediately start licking Arya’s face or anything like that. While Nym does eventually drop the snarling, she turns away with her pack, leaving Arya … for now.

When she does, Arya looks after her and mutters, “That’s not you.” It’s a beautiful scene that Maisie Williams plays perfectly. It’s Arya confronting the cost of her adventuring around, the price of leaving her past behind, the childhood she missed out on. That WAS indeed Nymeria, but is this or is this not Arya?

Now that she’s heading North (presumably still), I imagine she’s on a collision course with the Hound, Beric and Thoros, all names on her kill list. The Hound has changed and so has she. Will Arya stay true to her quest for vengeance, or will she see the softer side of Sandor Clegane? Have the Hound and Arya switched roles since the last time they were together? I don’t know! But I do feel like this is the most satisfying Arya’s story has felt in a while. 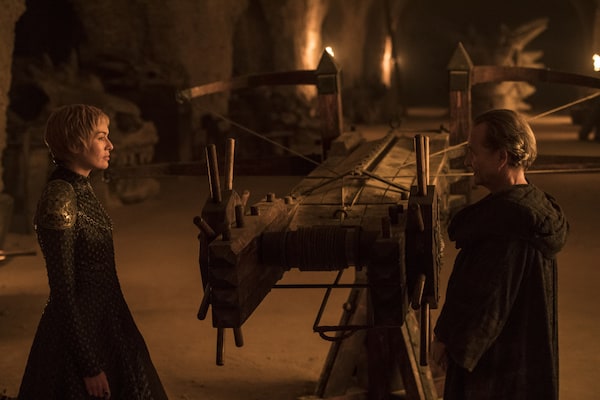 Cersei is gathering the lords that are loyal to the Tyrells, including Sam’s dad. She makes the pitch that Olenna is cuckoo for serving a Targaryen that wants to encourage a bunch of bad Dothraki hombres over their borders to take their Westerosi jobs. Nevermind the fact that Cersei set off a giant wildfire explosion in the center of King’s Landing, because, um, her emails?

They ask how Cersei plans on beating the dragons, to which Qyburn chimes in “I’m right on top of that, Rose!”

Jaime follows Sam’s dad (and hot brother) out and makes a plea to help them beat Dany. In exchange, they’ll make Lord Tarley Warden of the South. Still, Tarley has known Olenna his whole life, that’s too serious a bond to break.

Elsewhere, Qyburn escorts Cersei down to the collection of giant dragon skulls from the last battle with the Targaryens. The solution he’s come up with to fight this onslaught of fire-breathing monsters? A giant crossbow. Not as flashy as wildfire, but it does seem effective with the right eagle-eyed archer at the trigger. 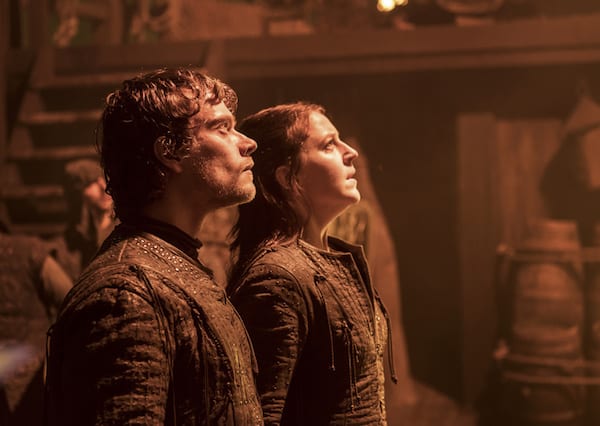 Yara and Ellaria are making Theon uncomfortable with some heavy flirting and heavier petting when there’s a crash. Surprise! Uncle Euron’s here!

Euron’s men lay siege to Yara’s fleet, burning ships down and boarding their boat in the most spectacular fashion. Euron gleefully tears through men as blood splatters. He even manages to kill two of three Sand Snakes (conveniently the two that are not Ellaria’s blood). Ellaria and her daughter Tyene are taken, which would make a most excellent engagement gift for Cersei to get her revenge for the murder of Myrcella.

Above deck, Yara and Theon are fighting for their lives. After a hard fought fight, Euron has Yara, daring Theon to save her. Too bad Theon isn’t here anymore, it’s just Reek. Poor, cowardly Reek leaps into the sea to save himself, leaving Yara to sail back a prisoner along with Ellaria and Tyene.