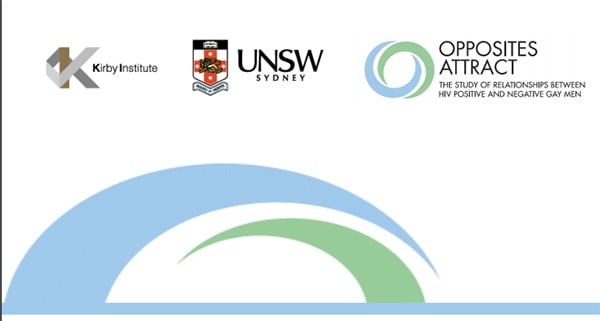 A new Australian study has revealed that HIV-positive men whose virus levels are undetectable due to treatment do not infect their HIV-negative partners.

The study was undertaken by The Kirby Institute of the University of New South Wales, which presented its findings Tuesday at the IAS Conference on HIV Science in Paris.

“Our research adds to the evidence from a small number of other international studies of heterosexual and homosexual couples and means that we can say, with confidence, that effectively treated HIV blocks transmission in couples of differing HIV status,” Andrew Grulich, the study’s chief investigator and a professor at the Kirby Institute, said in a statement.

Kevin Robert Frost, the CEO of amfAR, one of the organizations that funded the study, found the results encouraging.

“As HIV continues to disproportionately affect gay men and other men who have sex with men worldwide, the results of this study are extremely encouraging and underscore the need to get people tested and onto treatment immediately if they are HIV positive,” Frost said in a statement. “This important breakthrough underscores yet again how investments in HIV research yield invaluable dividends in the global response to HIV.”

The study, entitled Opposites Attract, bolsters others which have found reduced risk among seridiscordant couples when the HIV-positive partner is undergoing anti-retroviral drug treatment:

“This is life-changing news for couples of differing HIV status. But it is important that the HIV positive partner is under regular medical care and does not miss any of their anti-retroviral medication in order to ensure they maintain an undetectable viral load” said Professor Grulich. “Our data add to previous studies which show that there has never been a recorded case of HIV transmission from an HIV-positive person to their HIV-negative sexual partner when the HIV-positive partner had undetectable viral load.”