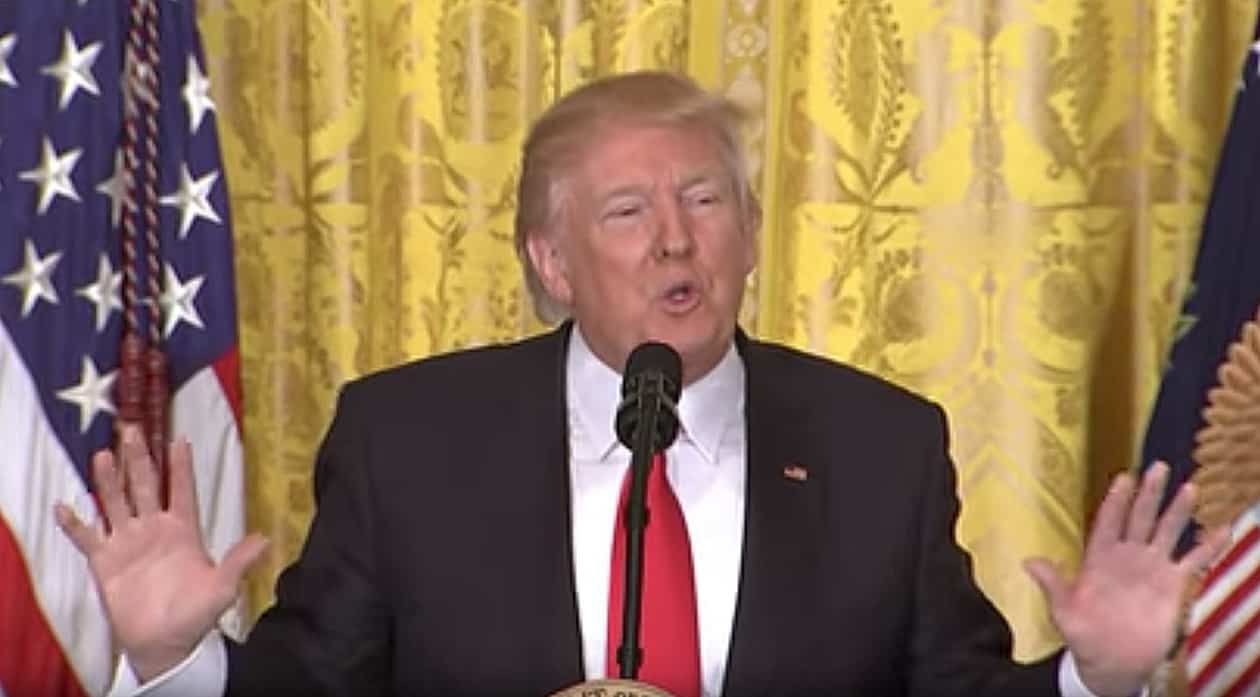 Donald Trump released a statement shortly after Attorney General Jeff Sessions announced Trump’s decision to take the cruel and inhumane step of doing away with the Deferred Action for Childhood Arrivals program, known as DACA, which grants work permits to undocumented immigrants who arrived in the U.S. as children. The move would affect more than 800,000 people.

As President, my highest duty is to defend the American people and the Constitution of the United States of America. At the same time, I do not favor punishing children, most of whom are now adults, for the actions of their parents. But we must also recognize that we are nation of opportunity because we are a nation of laws.

The legislative branch, not the executive branch, writes these laws – this is the bedrock of our Constitutional system, which I took a solemn oath to preserve, protect, and defend.

In June of 2012, President Obama bypassed Congress to give work permits, social security numbers, and federal benefits to approximately 800,000 illegal immigrants currently between the ages of 15 and 36. The typical recipients of this executive amnesty, known as DACA, are in their twenties. Legislation offering these same benefits had been introduced in Congress on numerous occasions and rejected each time.

In referencing the idea of creating new immigration rules unilaterally, President Obama admitted that “I can’t just do these things by myself” – and yet that is exactly what he did, making an end-run around Congress and violating the core tenets that sustain our Republic.

Officials from 10 States are suing over the program, requiring my Administration to make a decision regarding its legality. The Attorney General of the United States, the Attorneys General of many states, and virtually all other top legal experts have advised that the program is unlawful and unconstitutional and cannot be successfully defended in court.

There can be no path to principled immigration reform if the executive branch is able to rewrite or nullify federal laws at will.

The temporary implementation of DACA by the Obama Administration, after Congress repeatedly rejected this amnesty-first approach, also helped spur a humanitarian crisis – the massive surge of unaccompanied minors from Central America including, in some cases, young people who would become members of violent gangs throughout our country, such as MS-13.

Only by the reliable enforcement of immigration law can we produce safe communities, a robust middle class, and economic fairness for all Americans.

Therefore, in the best interests of our country, and in keeping with the obligations of my office, the Department of Homeland Security will begin an orderly transition and wind-down of DACA, one that provides minimum disruption. While new applications for work permits will not be accepted, all existing work permits will be honored until their date of expiration up to two full years from today. Furthermore, applications already in the pipeline will be processed, as will renewal applications for those facing near-term expiration. This is a gradual process, not a sudden phase out. Permits will not begin to expire for another six months, and will remain active for up to 24 months. Thus, in effect, I am not going to just cut DACA off, but rather provide a window of opportunity for Congress to finally act.

The decades-long failure of Washington, D.C. to enforce federal immigration law has had both predictable and tragic consequences: lower wages and higher unemployment for American workers, substantial burdens on local schools and hospitals, the illicit entry of dangerous drugs and criminal cartels, and many billions of dollars a year in costs paid for by U.S. taxpayers. Yet few in Washington expressed any compassion for the millions of Americans victimized by this unfair system. Before we ask what is fair to illegal immigrants, we must also ask what is fair to American families, students, taxpayers, and jobseekers.

Congress now has the opportunity to advance responsible immigration reform that puts American jobs and American security first. We are facing the symptom of a larger problem, illegal immigration, along with the many other chronic immigration problems Washington has left unsolved. We must reform our green card system, which now favors low-skilled immigration and puts immense strain on U.S. taxpayers. We must base future immigration on merit – we want those coming into the country to be able to support themselves financially, to contribute to our economy, and to love our country and the values it stands for. Under a merit-based system, citizens will enjoy higher employment, rising wages, and a stronger middle class. Senators Tom Cotton and David Perdue have introduced the RAISE Act, which would establish this merit-based system and produce lasting gains for the American People.

I look forward to working with Republicans and Democrats in Congress to finally address all of these issues in a manner that puts the hardworking citizens of our country first.

As I’ve said before, we will resolve the DACA issue with heart and compassion – but through the lawful Democratic process – while at the same time ensuring that any immigration reform we adopt provides enduring benefits for the American citizens we were elected to serve. We must also have heart and compassion for unemployed, struggling, and forgotten Americans.

Above all else, we must remember that young Americans have dreams too. Being in government means setting priorities. Our first and highest priority in advancing immigration reform must be to improve jobs, wages and security for American workers and their families.

It is now time for Congress to act!