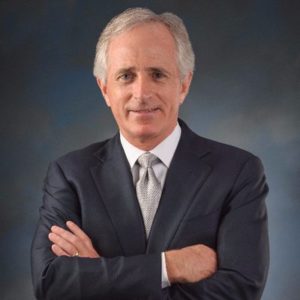 Following a Twitter spat on Sunday morning in which Trump made false accusations that Senator Bob Corker (R-TN) “begged” for his endorsement and Corker said the White House had become an “adult day care center,” Corker quadrupled down on Sunday in an interview with the New York Times.

In an extraordinary rebuke of a president of his own party, Mr. Corker said he was alarmed about a president who acts “like he’s doing ‘The Apprentice’ or something.”

“He concerns me,” Mr. Corker added. “He would have to concern anyone who cares about our nation.”

Other statements from the astonishingly candid interview:

“I know for a fact that every single day at the White House, it’s a situation of trying to contain him.”

Of his relationship with Secretary of State Rex Tillerson:

“A lot of people think that there is some kind of ‘good cop, bad cop’ act underway, but that’s just not true.”

“I don’t know why the president tweets out things that are not true,” he said. “You know he does it, everyone knows he does it, but he does.”

Corker also said that Trump’s impulsive threats toward other nations could set the U.S. “on the path to World War III.”