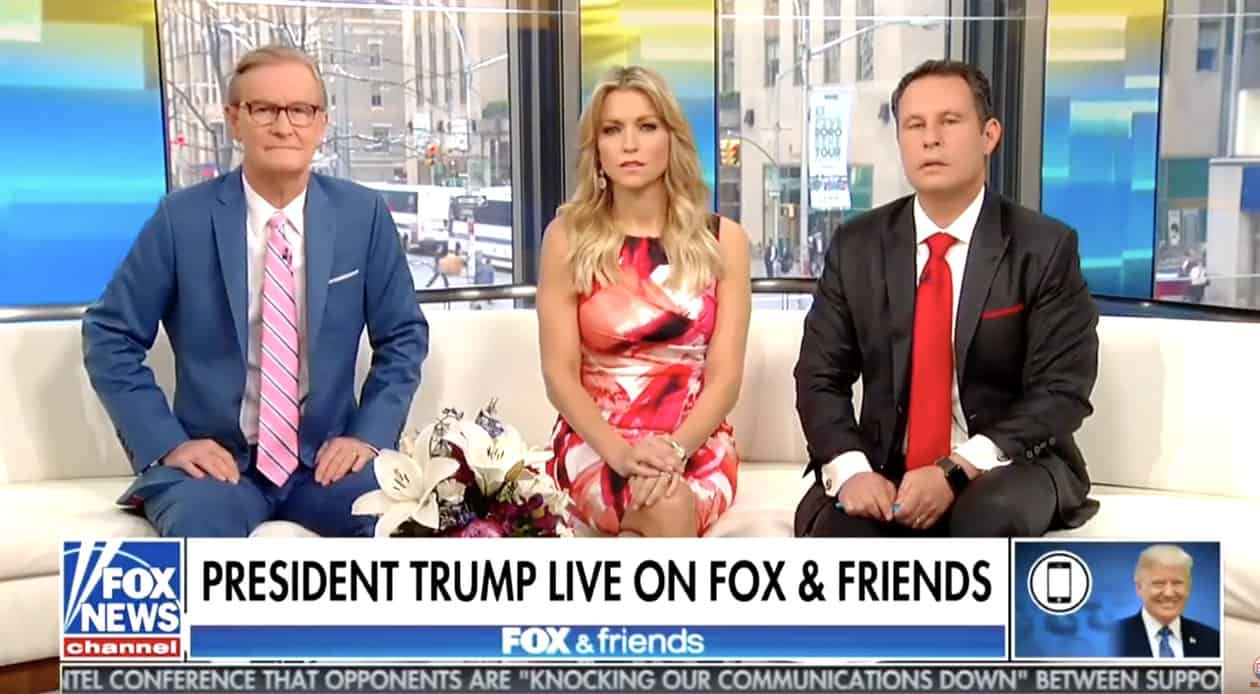 Trump called in to FOX & Friends on Thursday morning. After wishing Melania a ‘Happy Birthday’ he praised himself for accomplishing “a lot” with French President Emmanuel Macron before spiraling into a meltdown over all the controversies plaguing his administration.

Fully riled up, Trump was asked about James Comey, which really made Trump boil over.

Trump told the FOX & Friends hosts that he did spend the night in Moscow during the Miss Universe pageant in 2013.

Just follow the train of thought in this tirade (and listen below for the full insane effect):

“He said I didn’t stay the night. Of course I stayed there. I stayed there a very short time, well of course I stayed. His memo said I left immediately. I never said that! I never said I left immediately, and you know the funny thing, he does these memos, and then fake news CNN, who’s a total FAKE, you know they give Hillary Clinton the questions to the debate. Can you imagine, by the way, if you gave me the questions to a debate. They would have YOU out of business and they would have ME you better get out of this campaign, they don’t even bring it up. I mean, CNN. FAKE NEWS CNN they actually gave the questions to the debate…think about it. How bad is that? So anyway, Comey leaked, and by the way also, what he did with CNN in order to placate them, you saw that whole scenario. This is a big mistake, this book. He is GUILTY of crimes. And if we had a Justice Department that was doing their job, instead of spending 10 millions dollars…”

“Because of the fact that they have this WITCH HUNT going on with people in the Justice Department who shouldn’t be there. They have a WITCH HUNT against the president of the United States going on. Ive taken the position – and I don’t have to take this position and maybe I’ll change – that I will not be involved with the Justice Department. I will wait till this is over. It’s a total – it’s all lies and it’s a horrible thing that’s going on. It’s a horrible thing, and yet I’ve accomplished with all of this going on – more than any president in the first year in our history.”

Trump was then asked about his lawyer Michael Cohen.

“This has nothing to do with me,” he ranted. “I’ve been told I’m not involved.”

Asked why Cohen was pleading the fifth, Trump said it was because of his other businesses, which he doesn’t know anything about.

Trump also ranted over the demise of his VA pick, Ronny Jackson.

Said Trump: “These are false accusations. They’re trying to destroy a man. I did say, ‘Welcome to Washington. Welcome to the swamp.’”

Trump also pledged revenge against Senator Jon Tester for bringing out Jackson’s past: “Jon Tester, I think this is going to cause him a lot of problem in his state. I think Jon Tester has to have a big price to pay in Montana.”

Trump said he has a replacement for Jackson. He didn’t say who that was.

Previous Post: « Chris Hemsworth and Ellen Review the Best Moments of His Career (Spoiler: They’re All Shirtless) – WATCH
Next Post: Janelle Monáe Comes Out as Queer, Pansexual: ‘I Consider Myself to Be a Free-Ass Motherf–ker’ »