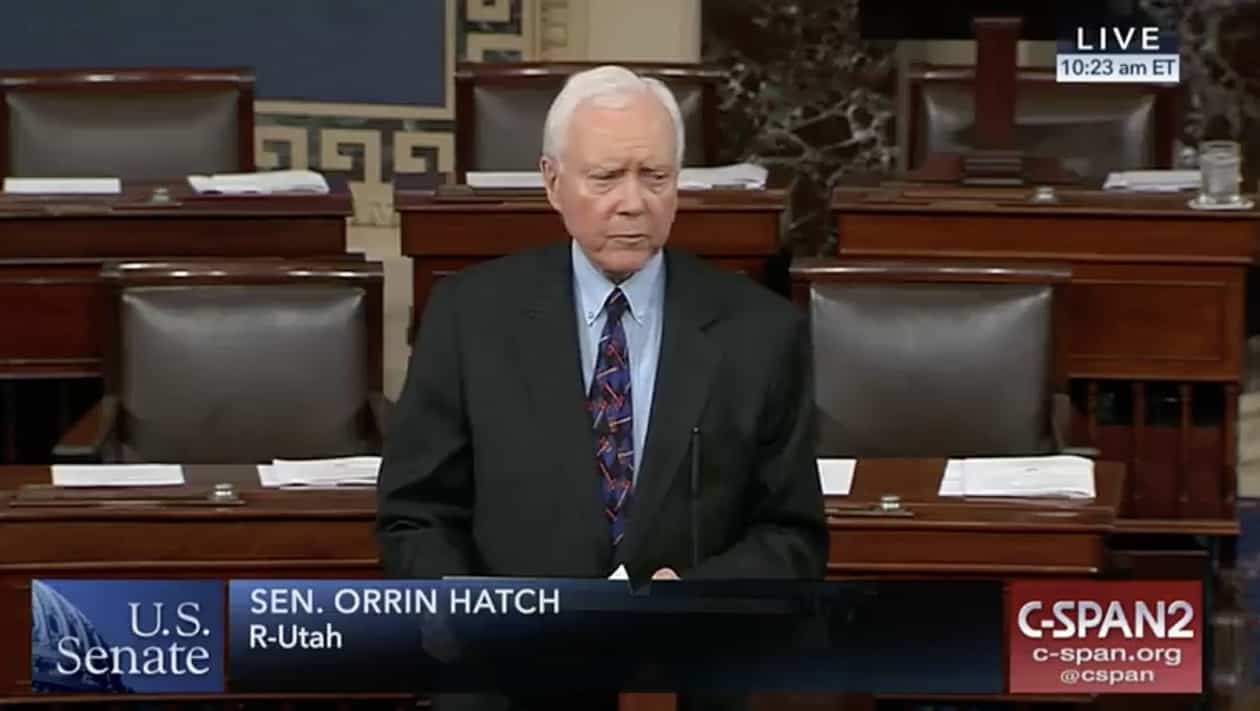 Said Hatch, in part: “Mr. President, if there were ever a time to show our LGBT friends just how much we love them, it is now. In a world where millions suffer in silence, we owe it to each other to love loudly. That’s why I am a strong supporter of Utah’s Love Loud Festival, among many other efforts to combat suicide and improve mental health in the LGBT community. These young men and women deserve to feel loved, cared for, and accepted for who they are.  They deserve to know that they belong, and that our society is stronger because of them. Mr. President, ensuring that our LGBT friends feel loved and accepted is not a political issue; we all have a stake in this. We all have family or loved ones who have felt marginalized in one way or another because of gender identity or sexual orientation—and we need to be there for them.”

Think Progress notes that Hatch’s remarks would have weight if he actually put his words into action, since he has consistently voted on issues that hurt LGBTQ youth. Writes Zack Ford:

Hatch has a complicated history when it comes to speaking out on LGBTQ issues, however: he voted to confirm cabinet secretaries like Ben Carson and Betsy DeVos, who both have clear records of opposing LGBTQ equality and who have since used their positions to dismantle protections for transgender people. DeVos, for instance, has rolled back protections in schools, and Carson has rolled back protections for homeless shelters, which means a transgender teen rejected by their family may have to struggle even more to find alternative forms of support.

Additionally, Hatch is a co-sponsor of the so-called “First Amendment Defense Act” (FADA), which would create a religious licence to discriminate against LGBTQ people. And just last week, he “applauded” the Supreme Court’s ruling in the Masterpiece Cakeshop case.

…If Hatch is looking to support LGBTQ youth, he might consider instead co-sponsoring The Equality Act, which would create federal nondiscrimination protections for the LGBTQ community. Not a single Republican in the Senate currently supports it.

Watch Hatch’s speech and read the transcript below:

Hatch’s remarks as prepared for delivery:

Mr. President, I rise today to address a public health crisis that has left in its wake a trail of tragedy and shattered life. The suicide epidemic has touched all sectors of our society, but the problem is particularly acute among LGBT youth, who experience bullying and discrimination at every turn. In the most devastating cases, these teenagers even face estrangement from their own families. That’s why today, in honor of Pride Month, I wish to devote a significant portion of my remarks to them—my young friends in the LGBT community.

Mr. President, the prevalence of suicide, especially among LGBT teens, is a serious problem that requires national attention. No one should ever feel less because of their gender identity or sexual orientation.

LGBT youth deserve our unwavering love and support. They deserve our validation and the assurance that not only is there a place for them in this society, but that it is far better off because of them.

These young people need us—and we desperately need them. We need their light to illuminate the richness and diversity of God’s creations. We need the grace, beauty, and brilliance they bring to the world.

That’s why, as we commemorate Pride Month, my message today is one of love for my LGBT brothers and sisters. It is also a call for action to Americans of all political stripes.

Regardless of where you stand on the cultural issues of the day—whether you’re a religious conservative, a secular liberal, or somewhere in between—we all have a special duty to each another. That duty is to treat one another with dignity and respect. It is not simply to tolerate but to love.

The first tenet of my faith is to love one another. The same man who taught this principle also lived it by his example. In an era characterized by rigid social divisions, he broke down barriers propped up by centuries of tradition and cultural belief. In his teachings, he made no distinction between man or woman, Jew or Gentile, sinner or saint, but invited all to come to him.

He saw beyond the arbitrary differences of group identity to the inherent worth of the individual. He taught that we are all equal because we are all children of the same God and partakers of the same human condition.

This man loved radically, and he challenged all of us to do the same.

Mr. President, if there were ever a time to show our LGBT friends just how much we love them, it is now. In a world where millions suffer in silence, we owe it to each other to love loudly.

That’s why I am a strong supporter of Utah’s Love Loud Festival, among many other efforts to combat suicide and improve mental health in the LGBT community. These young men and women deserve to feel loved, cared for, and accepted for who they are.

They deserve to know that they belong, and that our society is stronger because of them.

Mr. President, ensuring that our LGBT friends feel loved and accepted is not a political issue; we all have a stake in this. We all have family or loved ones who have felt marginalized in one way or another because of gender identity or sexual orientation—and we need to be there for them.

On a much broader scale, we need to be there for anyone struggling with feelings of isolation, especially those experiencing suicidal thoughts. By no means is suicide a problem exclusive to the LGBT community. In one way or another, this public health crisis has affected all Americans—regardless of color, class, or creed.

Over the last two decades, the suicide epidemic has taken tens of thousands of lives, with suicide rates rising by as much as 30 percent across the country. The severity of this public health crisis was thrown into sharp relief last week with the tragic deaths of Kate Spade and Anthony Bourdain.

In my home state of Utah, the statistics are particularly alarming. Every 14 hours, a Utahn dies by suicide, resulting in an average of 630 deaths each year. The problem is so acute that Utah now has the 5th highest suicide rate in the nation.

In addressing this topic today, my heart is both heavy and hopeful—heavy because suicide has already taken so many lives; hopeful because I believe we are on the cusp of a major legislative breakthrough that could turn the tide in the campaign against this epidemic.

As some of you may recall, I joined Senator Joe Donnelly last year in introducing the National Suicide Hotline Improvement Act—a bipartisan proposal that makes it easier for Americans of all ages to get the help and treatment they need when they are experiencing suicidal thoughts.

Our bill requires the FCC to recommend an easy-to-remember, three-digit number for the national suicide prevention hotline.  I believe that by making the National Suicide Prevention Lifeline system more user-friendly and accessible, we can save thousands of lives by helping people find the help they need when they need it most.

The Senate passed our bill with overwhelming bipartisan support in November. Now it’s time for the House to do its part. While I was pleased to learn that our legislation is slowly making its way through the House committee process, I am calling today for more urgent action. Every minute we wait, we leave helpless hundreds of Americans who are struggling with suicidal thoughts. There are literally lives on the line here—and leaving them on hold is not an option.

That’s why I call on my colleagues in the House to pass our suicide hotline bill without further delay. By doing so, we can prevent countless tragedies and help thousands of men and women get the help they so desperately need.

Now Mr. President, before I conclude, I wish to express my heartfelt belief that we can win the battle against suicide. But I would also remind my colleagues that no amount of legislation can fix this problem. No public policy is panacea for an issue as deep and intractable as the suicide epidemic.

Beyond legislation, however, there are steps we can take to create a society that is kinder, more civil and understanding—a society, in other words, where suicide is less of a problem.

It doesn’t take a social scientist to tell you that the coarsening of our culture has negatively affected our communities. As the political discourse breaks down, so, too, do the social ties that bind us together.

The gradual dissolution of civil society has led to unprecedented levels of loneliness, depression, and despair. In this sense, suicide is merely a symptom of a much larger problem.

But even though there’s hopelessness, there is still reason to hope. I firmly believe that by restoring civility to its proper place in our society, we can fight the despair that has seized hold of so many.

Civility starts with the words we use. Whether in person or online, we can be softer in our language, kinder in our actions, and stronger in our love. We can combat coarseness with compassion, choosing empathy instead of anger.

On an individual level, reclaiming civility entails a fundamental shift in how we view our political opponents. No longer should we see each other as adversaries in a zero-sum game but as allies in preserving the American experiment for future generations.

Mr. President, restoring civility and respect to the public square cannot be achieved through legislation. Ultimately, this is a change that must take place in the heart of every American. But here in the Senate, we can lead by example, which is why I urge all of my colleagues to join me today in recommitting to civility.

I yield the floor.