Seth Meyers On The Trump Tapes: Michael Cohen 'Never Closes His Mouth Because Of The Microphone Under His Tongue' - WATCH - Towleroad Gay News 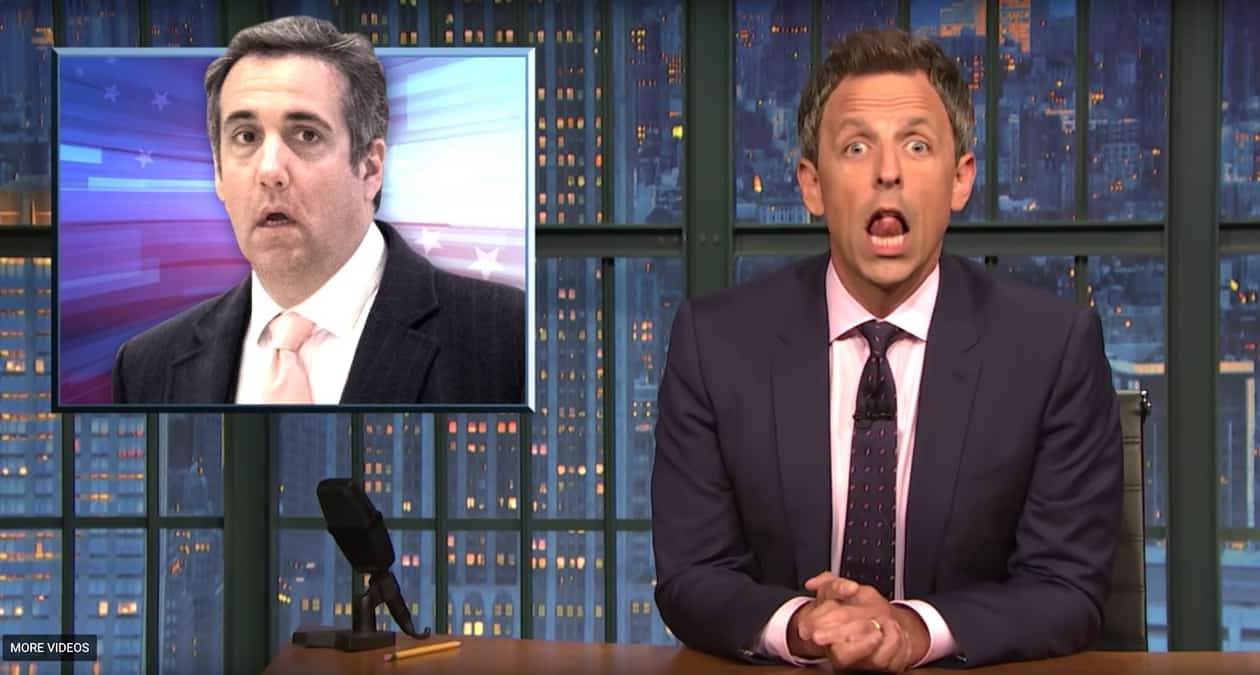 Said Meyers: “This week we learned that Michael Cohen, who handled some of Trump’s most sensitive personal matters, had secret recordings in his possession when the FBI raided his office and home. And it wasn’t just one or two recordings, federal prosecutors reportedly obtained 12 audio recordings. Twelve! They basically came away with an Eagles box set. And look, you can’t be a lawyer in charge of shady business dealings and also record everything. He’s like a hitman who decides to wear fingerless gloves. (in Cohen voice) ‘I like to leave a calling card on all my victims: my fingerprints.'”

Meyers also looked at Trump’s astonishment at the fact that he was recorded:

Replied Meyers: “What kind of lawyer would tape a client?” The kind of lawyer you would hire. Look at him! He never closes his mouth because he has a microphone under his tongue.”

When Cohen and Trump began discussing the payment to hush former Playboy playmate Karen McDougal, it sounds like the then candidate is insisting to Cohen that the payment be made in cash. It’s an analysis which Trump’s team disputes, insisting Trump said “Don’t pay with cash…check.”

Said Meyers: “That’s insane. Their claim is that Cohen set up a secret shell company to pay off a tabloid after that tabloid bought the story in order to kill it, and Trump wanted to make sure the payment was on the books.”

Rudy Giuliani argued that assertion earlier this week, adding: “I ensure you we listened to [the tape] numerous, numerous times…The president is not an idiot.”

Replied Meyers: “Aww see. You blew it right at the end there. That excuse might have worked until you said ‘the president is not an idiot.'”

Meyers noted that Giuliani kept insisting that viewers listen for what Trump is really saying: “This is evidence in a criminal investigation and they’re treating it like it’s Laurel versus Yanny.”