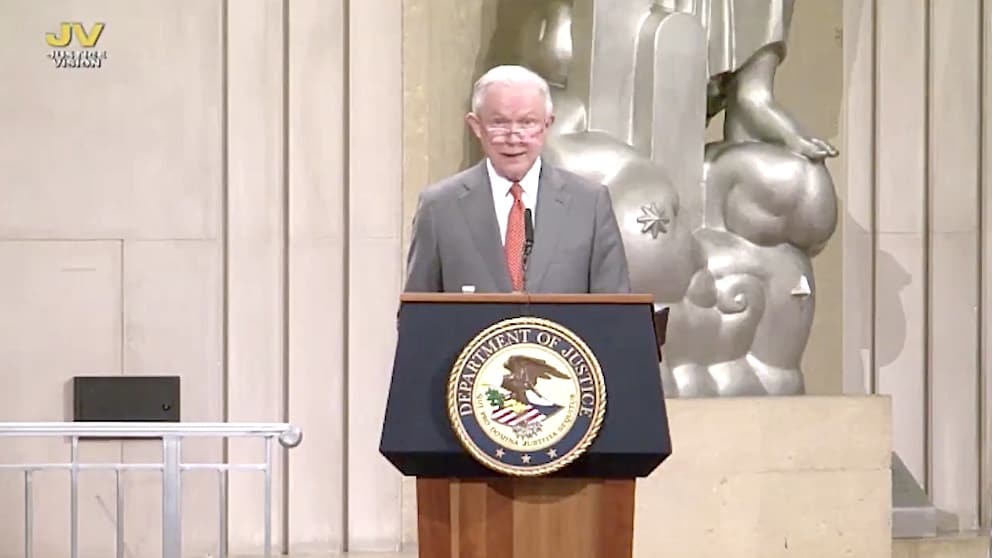 The anti-LGBT hate group Alliance Defending Freedom is behind the Justice Department’s new “Religious Liberty Task Force” announced by Attorney General Jeff Sessions this week. The task force is intended to implement and enforce anti-LGBTQ Trump policies that would allow people to discriminate based on religious beliefs.

Media Matters reports: “Such discrimination is a major part of the mission of anti-LGBTQ legal powerhouse Alliance Defending Freedom (ADF), and the announcement was followed by a panel that included a major ADF client and was moderated by an ADF staff alumna. Coupled with ADF’s involvement in the announcement, the new task force demonstrates the influence of the group’s extreme anti-LGBTQ views on the administration.”

They add: ‘ADF was one of the first to break the news of the July 30 “Religious Liberty Summit” in which the task force was announced, noting that the event would feature a panel including the group’s client Jack Phillips, a Christian baker who refused to bake a wedding cake for a gay couple and who took his case to the Supreme Court in Masterpiece Cakeshop v. Colorado Civil Rights Commision. ADF’s news release, however, did not mention that the panel’s moderator, DOJ media affairs specialist Kerri Kupec, worked at ADF for four yearsbefore joining DOJ in January. During his remarks, Sessions said that the DOJ had “been holding listening sessions” with “religious groups across America,” which ADF has acknowledged it has been involved with in the past. Extreme anti-LGBTQ group Liberty Counsel has already praised the announcement of the task force. The Trump-Pence administration has shown a coziness with extreme anti-LGBTQ groups and with ADF, in particular. Sessions’ DOJ issued an unusual brief on behalf of Phillips before oral arguments in Masterpiece Cakeshop, and ADF alumni and allies have been hired by various agencies and nominated for federal judgeships.’

The Human Rights Campaign denounced the DOJ. Said HRC Legal Director Sarah Warbelow: “This taxpayer funded task force is yet another example of the Trump-Pence White House and Jeff Sessions sanctioning discrimination against LGBTQ people. Over the last 18 months, Donald Trump, Mike Pence and Jeff Sessions have engaged in a brazen campaign to erode and limit the rights of LGBTQ people in the name of religion. The Attorney General standing shoulder-to-shoulder this morning with anti-LGBTQ extremists tells you everything you need to know about what today’s announcement was really all about.”

GLAAD’s President and CEO Sarah Kate Ellis blasted the task force: “Though freedom of religion is a core American value, religious exemptions from adhering to non-discrimination protections are not. Sessions’ announcement today is yet another example of the Trump administration’s anti-LGBTQ agenda as they seek to weave protections for those seeking anti-LGBTQ religious exemptions into the government.”

As did the Democratic National Committee in a press release: “From supporting the right to refuse service to same-sex couples to banning military service by transgender individuals to removing mentions of LGBTQ issues from the White House website, Attorney General Sessions’ creation of a Religious Liberty Task Force is just the latest assault in this administration’s continued campaign against LGBTQ people and our civil rights. By creating this task force, Sessions is establishing a unit dedicated to undermining LGBTQ rights and giving anti-LGBTQ far-right extremists like task force head Jesse Panuccio a taxpayer-funded platform to push their anti-equality agenda. Rather than ensuring every person has equal protections and opportunities, Sessions is shamefully doubling down on bigotry. This action is further proof that Republicans continue to push forward an agenda completely out of step with the American people and our values. Democrats will continue to focus on how to improve opportunity for all Americans regardless of gender, sexual orientation, or income.”