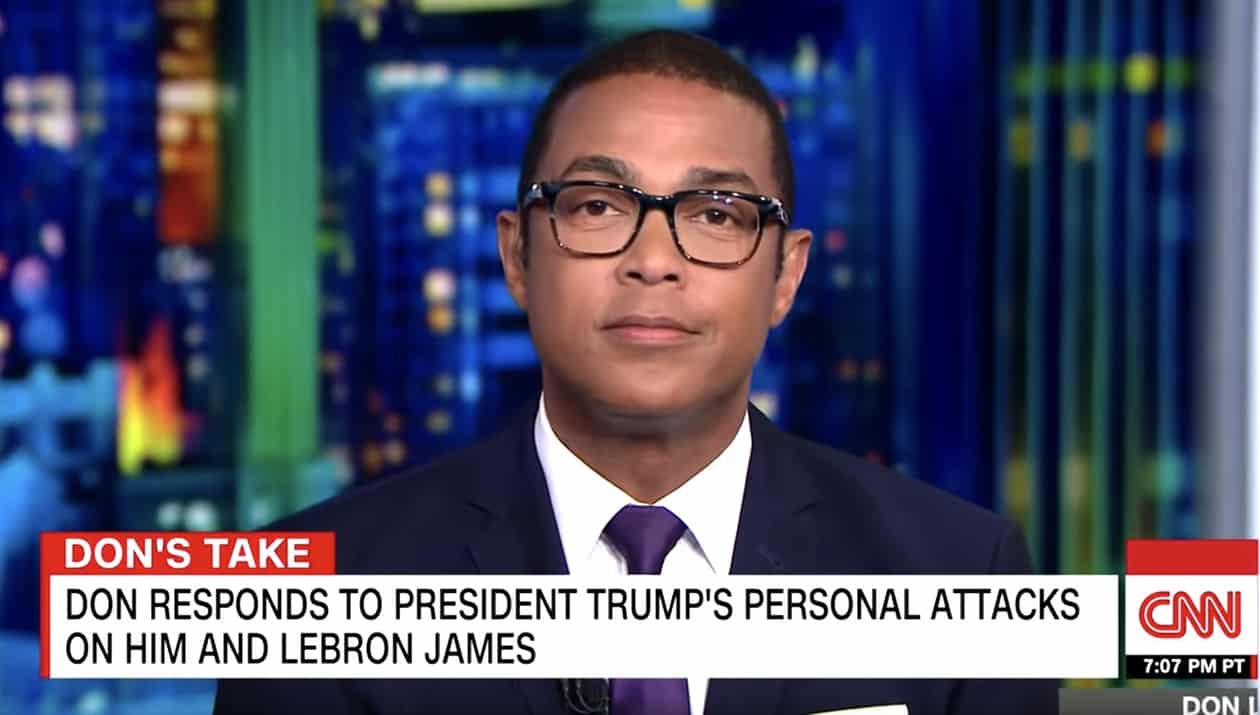 Don Lemon responded to the “nasty, hateful swipe” Trump took at him and LeBron James over the weekend.

As you may recall, Trump attacked Lemon shortly before midnight on Friday night. He was watching Lemon interview NBA legend Lebron James on “fake news” CNN about the opening of Lebron’s ‘I Promise School’ for at-risk youth in Ohio.

Tweeted Trump: “Lebron James was just interviewed by the dumbest man on television, Don Lemon. He made Lebron look smart, which isn’t easy to do. I like Mike!”

Lemon started in: “Unlike this president who lashes out wildly at anyone who criticizes him, LeBron James — in addition to being a brilliant black man, a superstar in his sport, and a hero to his community — is taking the high road, which is exactly where he belongs.”

He added: “Referring to African-Americans as dumb is one of the oldest canards of America’s racist past and present: That black people are of inferior intelligence.”

Then Lemon offered some examples of people who clapped back at Trump on Twitter, including this brilliantly telling tweet from Keith Boykin:

“This president constantly denigrates people of color,” Lemon added, “and women too.”

Lemon pointed out Trump’s attacks on Rep. Maxine Waters (D-CA), his birther crusade against President Barack Obama, and his horrific statements about black athletes who take a knee during the National Anthem.

“Let me not mince words here: This president traffics in racism and is fueled by bullying,” said Lemon. “From keeping children at the border in cages to bullying journalists at every one of his rallies and every chance he gets. President Trump is trying a divide-and-conquer strategy here and here’s how it goes. He divides by race and tries to conquer decency by smearing and besmirching the truth and the people who fight to uphold it.”

Asked Lemon: “I’ve wondered if he will succeed. Is he revealing who we really are?”

Lemon added that he feels lucky to have a platform to fight back, adding:

“But what about those who don’t have a voice – the kids separated from their parents at the border…the kids who don’t have the chance to attend LeBron’s school or any halfway decent school…the people of color who are attacked by their fellow citizens who feel emboldened to be publicly racist because the president is. Will the country stand up for them? We, the decent and truly patriotic people who really love America and believe in its greatness, have to — because clearly, Donald Trump won’t.”

Previous Post: « This Firefighter Lip Sync is the Stuff of Dreams: WATCH
Next Post: Moms Open Up to Their Gay Sons About Raising Them, Hopes, Fears, and When They Knew: WATCH »