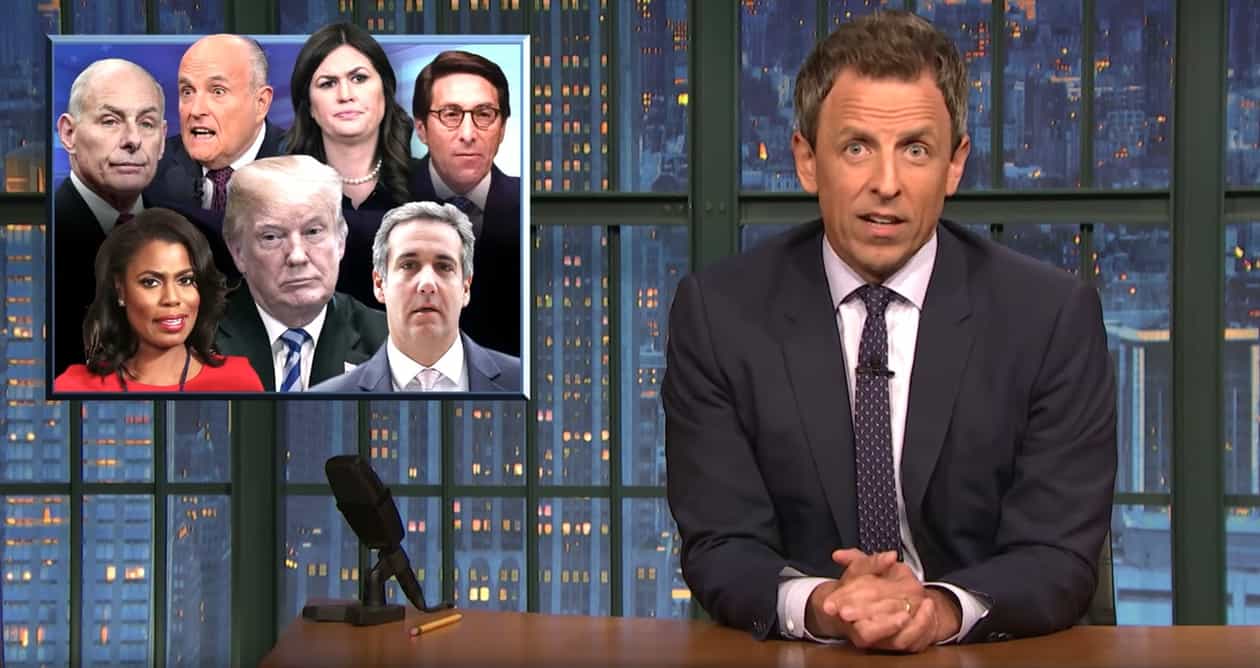 Seth Meyers on Monday night looked at how Rudy Giuliani, former White House staffer and Apprentice contestant Omarosa Manigault, and others he has hired are causing a snowballing set of problems for Trump.

Giuliani is currently hitting the news shows, asserting that he knows what Robert Mueller is up to: trying to get Trump to commit perjury.

Quipped Meyers: “If there’s any trap tailor-made for Trump, it’s a perjury trap. That or fried chicken under a box.”

Trump’s lawyers have ruled out questions from Mueller on obstruction because they claim Mueller already knows the answers. Giuliani and fellow Trump lawyer Jay Sekulow took over Sean Hannity’s radio show on Friday to discuss the case.

Said Meyers: “That’s right. For some reason, Trump’s legal team hosted a radio show. The president of the United States is being represented in the Russia investigation by the Z100 ‘zoo crew’. ‘You’re listening to Rudy and Jaybird in the morning on WHUN, the Witch Hunt.’”

Meyers also pointed out a major lie Giuliani made to Jake Tapper regarding Trump’s request that fired FBI director James Comey give Michael Flynn a break.

Meyers then moved on to Trump’s own attempts to delegitimize the Russia investigation, slamming attorney general Jeff Sessions for being missing in action.

“Okay first of all, when Sessions is scared he doesn’t get stiff. He scurries back into his mushroom house and sips broth from an acorn cap. Second, you’ve never seen anything so rigged in your life? You know what’s rigged? Your life. You’re a billionaire celebrity who dated models and became president despite being a notorious idiot and open racist who had four bankruptcies and been sued thousands of times. Trump was born on third base and thinks he scored a touchdown because he doesn’t know how the rules work.”

Meyers then moved on to Omarosa, reading the excerpt of her book which describes Trump eating a piece of paper in the Oval Office.

Said Meyers: “If your favorite food is well done steak, how far away is paper, really?”

It was an allegation Michael Cohen disputed, which is pretty much a joke, Meyers noted:

“So now we have one liar who admits she lied in the past claiming she’s telling the truth now about the liar she worked for, and a third liar who’s under investigation for lying who taped the first liar to prove he wasn’t lying said the second liar’s lying about the first liar. I’m starting to think none of this happened or they all ate pieces of paper.”

Meyers then moved on to the secret recording of John Kelly firing Omarosa, and Trump’s attempts to destroy Omarosa’s credibility, displaying this tweet: ‘While I know it’s “not presidential” to take on a lowlife like Omarosa, and while I would rather not be doing so, this is a modern day form of communication and I know the Fake News Media will be working overtime to make even Wacky Omarosa look legitimate as possible.’

Quipped Meyers: “You know what made Omarosa look legitimate? Putting her in the White House.”

Concluded Meyers: “This is what happens when you’re a con artist who surrounds himself with other con artists. you think you’re picking everyone else’s pockets and then one day you reach for your own wallet and it’s not there and you look up and you see Michael Cohen is eating it.”