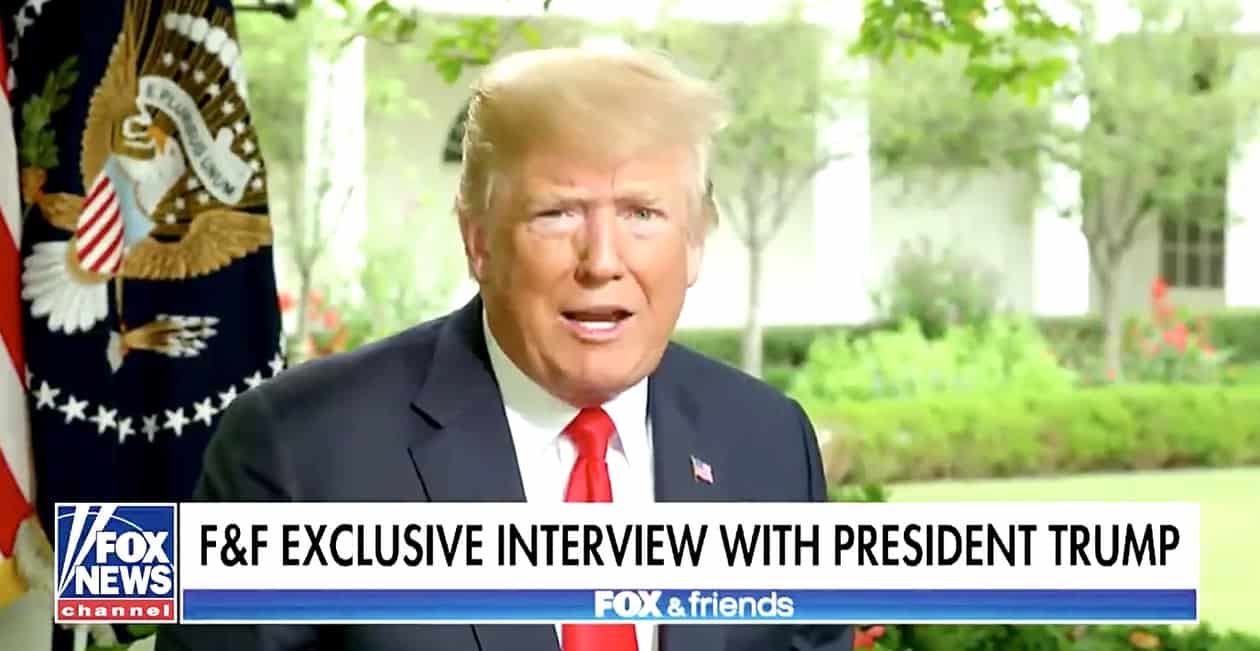 Trump slammed Attorney General Jeff Sessions while claiming that the DOJ is easy on Democrats.

“I put in an attorney general that never took control of the Justice Department.” -President @realDonaldTrump pic.twitter.com/ARTg1JbeK2

Trump went on to further blast Sessions in a rant about the “corrupt” Department of Justice: “There’s such corruption. Before I got here, it’s from before I got here. It’s from the Obama administration. When everybody sees what’s going on in the Justice Department, I always put ‘justice’ now with quotes, it’s a very, very sad day….The only reason I gave [Jeff Sessions] the job is because I felt loyalty,” Trump said in the Fox News interview. “He was an original supporter.”

President @realDonaldTrump on if he would fire Attorney General Jeff Sessions pic.twitter.com/MiG6z18mmt

Asked if he would pardon former campaign manager Paul Manafort, Trump claimed he hardly knew Manafort, and pointed at Hillary: “I have great respect for what he’s done in terms of what he’s gone through. I would say what he did … every consultant, every lobbyist in Washington probably does. Look at the crimes that Clinton did, with the emails, and she deletes 33,000 emails after she gets a subpoena from Congress and this Justice Department does nothing about it. And all of the other crimes that they’ve done…I didn’t know Manafort well, he wasn’t with the campaign long. They got him on things totally unrelated to the campaign. And by the way they got [Michael] Cohen on things totally unrelated to the campaign. I’m not involved. I wasn’t charged with anything…But when you look at the corruption on the other side.”

Asked about his claims that the campaign finance violations for which his former lawyer Michael Cohen was convicted, Trump attacked Cohen for flipping and said it should be illegal.

Said Trump: “If somebody defrauded a bank and he’s gonna get 10 years in jail, or 20 years in jail, but you can say something bad about Donald Trump and you’ll go down to two years or three years, which is the deal he made, in all fairness to him most people are going to do that. It’s called flipping, and it almost ought to be illegal…I’ve seen it many times…They make up things and now they go from 10 years to they’re a national hero.”

Trump: Flipping should be illegal pic.twitter.com/qVFsOWHbkv

Asked if he was considered about Democrats moving to impeach him should they win the midterms, Trump replied: “I don’t know how you can impeach somebody who’s done a great job.”

He also said the “market would crash” if he got impeached and “everybody would be very poor.”

President @realDonaldTrump: "I don't know how you can impeach somebody who's done a great job." pic.twitter.com/3BZNpSzish

Trump gave himself an “A+” when asked to grade himself on the job he’s done so far in office: “I don’t think any president has ever done what I’ve done in this short — we haven’t even been two years.”

.@ainsleyearhardt: "What grade do you give yourself so far?"

President @realDonaldTrump: "So I give myself an A+." pic.twitter.com/eI2BcOHiFQ