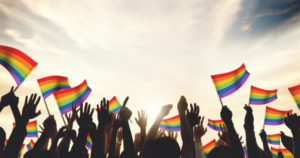 When a local homophobe continued to take down Chicago residents Handal and Zadette Rosado’s rainbow Pride Flag and replace it with the old stars and stripes they weren’t sure how to proceed.

Handel told The Chicago Tribune, “I think the message was quite clear. It was sort of the intolerant view vs. the inclusive liberal view. I think if somebody would have just taken the flag and not replaced it with anything, that wouldn’t necessarily have sent quite the same message. It’s more premeditated this way.”

Handel concluded to the Tribune, “The fact that this story might make someone smile, maybe it’s not so bad, and maybe the hate we see so much is not the mass of people but individuals. I think it makes it all worth it if this crummy thing that happened can lead to spreading more joy and happiness in the world.”