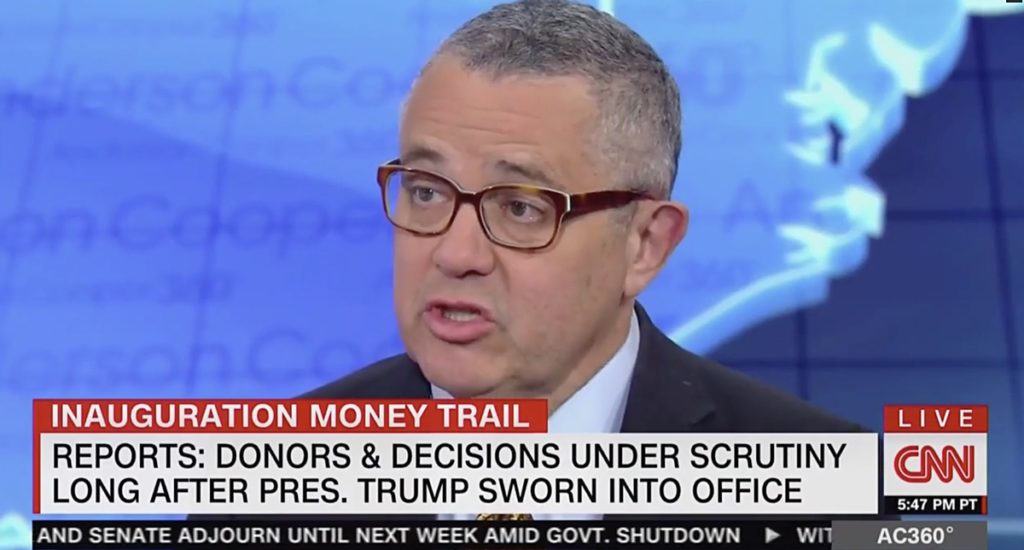 CNN’s Jeffrey Toobin and Jon Berman took up one of the larger scandals involving the Trump presidency – whether Trump’s inauguration was a money laundering operation with Ivanka Trump in the middle. Earlier this month, ProPublica reported: “How the inaugural committee managed to spend all the money it raised remains a mystery, nearly two years after the event. While groups that support political candidates or issues must publicly detail their spending, an inaugural committee is required to list only its top five contractors. That leaves about $40 million unaccounted for.”

Said Toobin: “I think the first question is, did someone steal the money? If the money didn’t go to salaries if the money didn’t go to events, did someone put it in their pocket? That’s a straightforward factual issue that an audit should be able to determine. Then you get into the other subsidiary questions, which are, was there some sort of improper motive, improper connection between donors and what they got.”

Added Toobin: “It is worth remembering that our whole political system at some level is based on pay to play. People give money to the inaugural — for mixed motives at best. So I think that is very much a subsidiary question, unlikely to be proven improper. But if somebody stole the money, they stole the money and that’s obviously a crime.”

Berman was joined by Greg Jenkins, who ran George W. Bush’s second inauguration, and said the money trail baffles him.

Said Jenkins of Trump’s inaugural fundraising amount ($107 million – about double what was raised for the Bush inaugural), of which he spent far less: “I can’t figure it out. They actually raised more than twice the amount that we raised. I think adjusted for current dollars, the amount we raised comes out to be about $54 million, which is quite a bit less. The two biggest costs are the events and staff. We had three times as many staff and four times as many events. So where that money went, I couldn’t tell you. Most of the money came from donors. If I were a donor, I would like to know where that money went. I can’t explain it.”