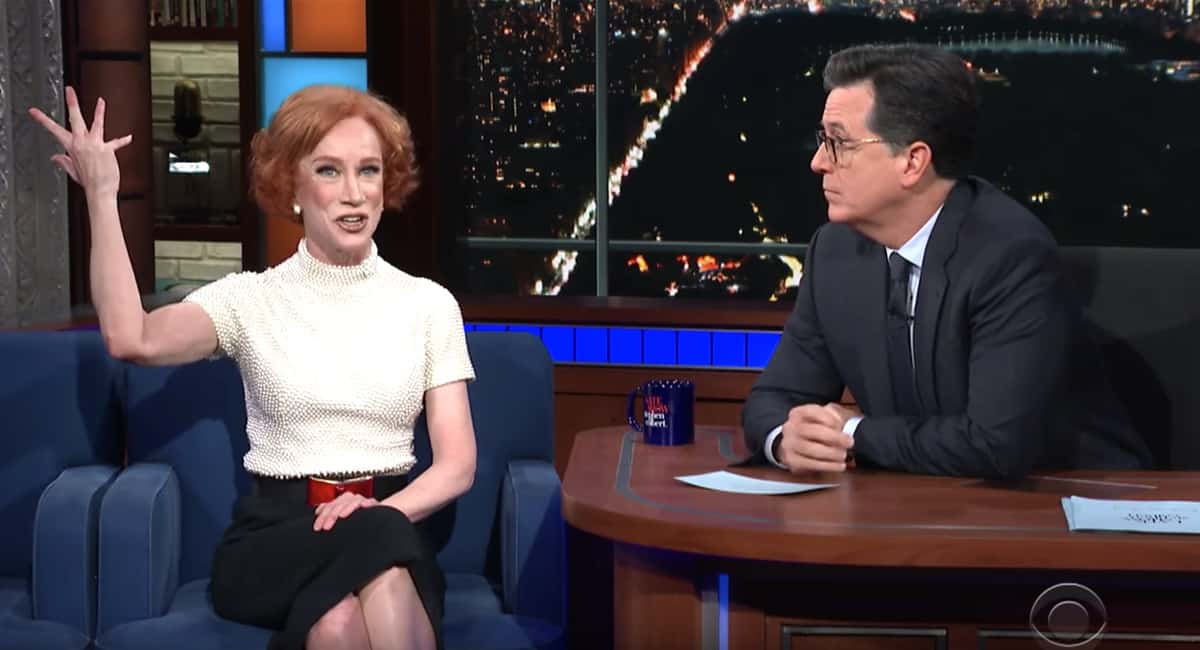 Kathy Griffin met Stephen Colbert for the first time last night and took him through the entire severed head saga, for which she was told she was threatened with the charge of conspiracy to assassinate the president.

Said Griffin: “Yes, I took a photo that changed my life irrevocably. That was one thing. Because the walls caved in on me, and the accidental president – it’s an accident– he tweeted at me that, you know, my– he tweeted against me, which made everything cancel in my life, basically. I was in the middle of a 50-city tour, and within 12 hours I had not one single day of work ahead of me. And, by the way, to this day, I do not have one single day of paid work ahead of me. So I’ve been digging myself out of this rabbit hole for last year and a half.”

She added: “And the next day I got a call from one of my attorneys that the Department of Justice – and a lot of people don’t know this part – were putting me under a two month federal investigation and considering charging me with the crime of – this is real – conspiracy to assassinate the president of the United States.”

Griffin went on: “So a lot of people thought you know I got a call from the Secret Service or got in fake Hollywood trouble. But, no, this is real-life trouble…I was on the no fly list for two months. So then they wanted me to go downtown to the police precinct and they wanted get video of what’s called the perp walk. And this was coming – I’m assuming – directly from the Oval Office and Jeff Sessions. That’s where your tax dollars went, everybody, investigating Kathy Griffin. Mr. Cooper said I was disgusting, and I lost about 75% of my friends that never came back. And it was hard.”

Previous Post: « Don Lemon and Republican Rick Wilson Laugh at Trump’s Declaration He’s Cleared: ‘This is Not a Well Man’ – WATCH
Next Post: Common Kitchen Chemical Found to Have Effect on Penis Size »