The holiday track, according to Chart Data, has broken the Spotify record for the most streams in a single day, with 10.8m streams on Christmas Eve. The record was previously held by XXXTentacion’s “Sad!,” which garnered 10.4m streams on 19 June, the day after he was fatally shot. 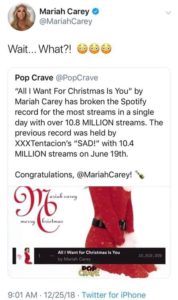 A 2016 Guardian report said that Carey makes about $350 000 a year in royalties on the perennial holiday favorite.

The track was released in November  of 1994 and was the lead single for Carey’s Merry Christmas holiday album.

“All I Want for Christmas Is You” is currently in seventh place on the Billboard Hot 100, making it the highest-charting holiday-themed track in 60 years.