Actor, writer, and stand-up comedian Sampson McCormick’s never had the luxury of ignoring the ills facing his community and ignoring the call to help do his part.

Sampson’s 2015 comedy album That Bitch Better Be Funny: Live at the Howard Theater, was a finalist for a Grammy nomination. And he continues to sell out concert venues nationwide.

“That’s actually where the title for my comedy album came from,” he told Out in 2015. “I was late to a show once, and waiting to get in behind these two black girls, and I overheard them say, “20 bucks a ticket? For20 bucks, that bitch better be funny.” Laughs. “I’ve never forgotten that.”

Last October McCormick headlined a Coming Out Day event at the National Museum of African-American History in Washington D.C.. The event celebrated the contributions of black queer art of the Harlem Renaissance; McCormick was the first LGBTQ comic to ever perform at a Smithsonian museum.

Over the years Sampson’s used his gifts to help tackle everything from HIV to promoting PrEP and now he wants to tackle mental health.

For example when the California Department of Health approached McCormick to be the face of their East Bay PrEP campaign, McCormick didn’t hesitate to get involved saying, “HIV affects us all, no matter what our status may be, and I’ve done all I could to be involved in the fight over the years. Thankfully my passion translated in a way that the community reached out to me and asked me to be a voice and face of the campaign, and I happily obliged.”

But with a Different Direction now it’s personal and he set mental health issues in his sights.

” knew what I wanted to make.” 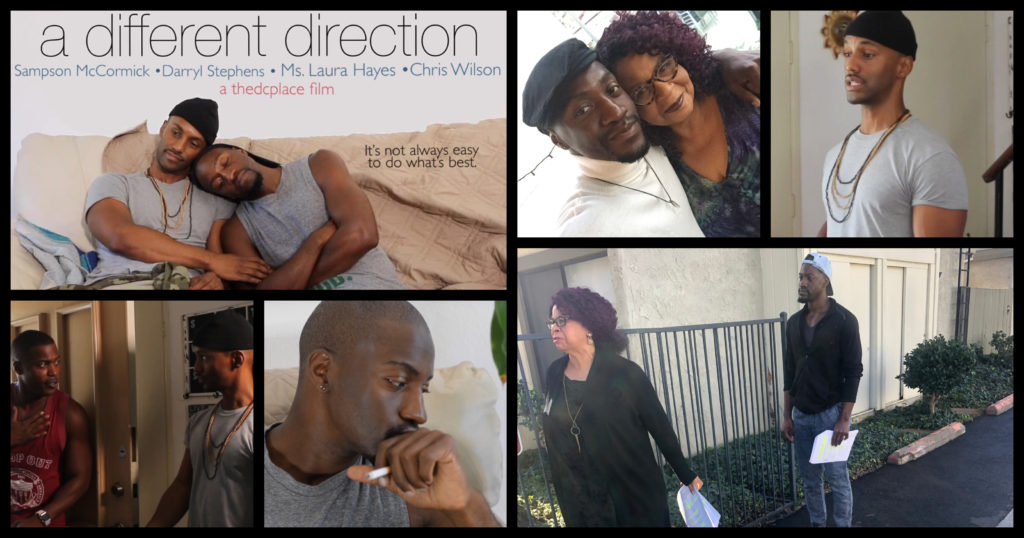 “Particularly in the Black LGBTQ community and within many Black families our stories don’t acknowledge mental illness—as if it’s a mark of shame. I think Toni Morrison said something about that once—that some Black folks felt they couldn’t afford the mental ailments of white people.”

Sampson’s confessed to attempting suicide himself but he brushes his hand away at the mere suggestion—”no—this is not autobiographical—but sometimes you need fiction to get to the truth.”

He says of Hayes’ character who plays his mother that she was traumatized and  passed some along to her son. “He has to make the brave decision to stand up to her and make better emotional wellness decisions for himself. It’s basically like getting out of an emotionally abusive relationship, except this one is with a parent and son.”

A Different Direction will have its world premiere on February 16th at the Oakland LGBT Center.