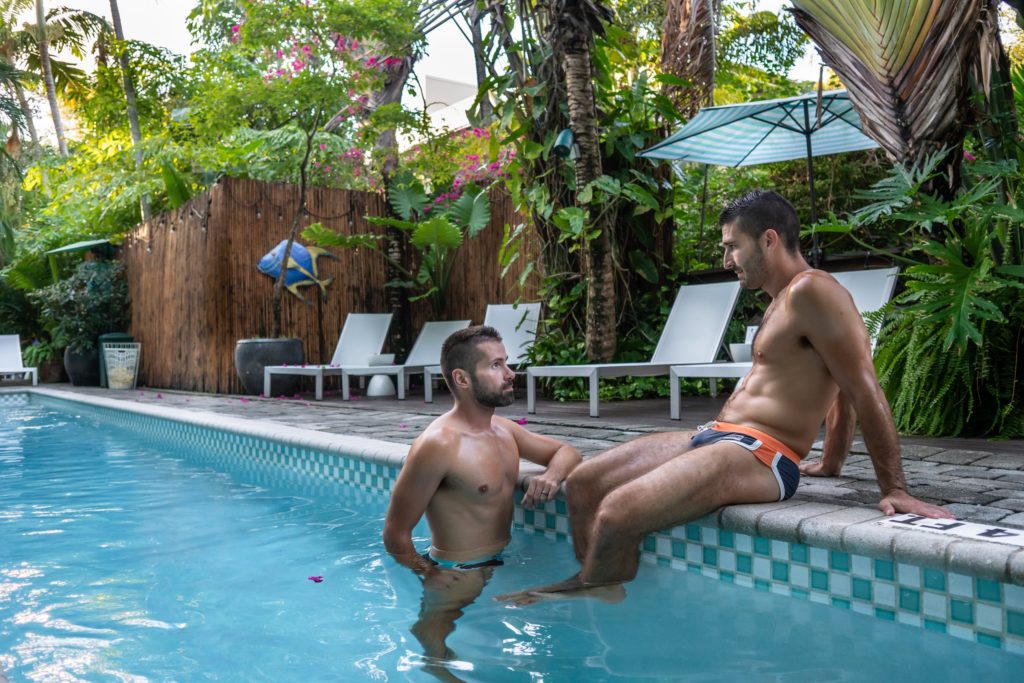 Fort Lauderdale is one of our favorite LGBTQ destinations in the US. It has so many fun male-only clothing-optional resorts, a terrific gay scene in Wilton Manors and awesome events happening throughout the year.

Fort Lauderdale is also the gateway to the Everglades National Park, and has some fascinating museums to check out, in particular the World AIDS Museum and the Stonewell National Museum.

Whilst there’s plenty to keep gay travelers busy in Fort Lauderdale, we’ve set out our 5 top highlights for you to check out:

1. Partying in the gay scene of Wilton Manors

Wilton Manors is the gay beating heart of Fort Lauderdale. It is comprised of several blocks, each lined with gay bars, clubs, shops, LGBTQ businesses, restaurants and more. Some of the most popular gay hangouts include Georgie’s Alibi/Monkey Bar, DrYnk, Hunters and Gym bar. Find out more in our guide to the best gay bars and clubs in Fort Lauderdale.

Wilton Manors is also the focal point of some super fun gay events like the Stonewall Pride in June and the “Wicked Manors” Halloween party every 31 October. We went to Wicked Manors and had an absolute blast: the entire neighborhood transformed into one massive Halloween gay street party with everyone dressed up:

2. Stay in a male-only clothing-optional resort

Fort Lauderdale has many resorts targeted to gay men. Some of the most notorious include the “Ed Lugo Resort”, “The Worthington”, “Grand Resort & Spa” (who you see sponsoring a lot of the Ru Paul Drag Race episodes) and the more upscale “Pineapple Point”.

These resorts are “male-only” and usually clothing-optional. Some are based near or by the beach, or further inland in the gay scene of Wilton Manors. One of the things we love about the gay resorts we tried out in Fort Lauderdale is they have a “Happy Hour” every afternoon, which encourages more shy and introvert guests to socialise and make friends. For more, check out our detailed gay travel guide to Fort Lauderdale.

Fort Lauderdale is the gateway to the Everglades National Park. This is a large wetlands preserve in South Florida, made up of coastal mangroves, sawgrass marshes and many different species. It was designated a World Heritage Site by UNESCO in 1979. It’s a popular spot to come and see alligators in the wild, as well as different species of birds and maybe a few snakes if you’re lucky.

We visited the Sawgrass Recreation Park and took a guided airboat ride through the wetlands. We spotted several alligators, which come very close to the boats. Although it’s very safe, it’s still quite scary when you’re just a few feet away from a hungry looking alligator!

4. Educate yourself in important LGBTQ history

Fort Lauderdale has two excellent not-to-miss museums we think all gay travelers should check out. The first is the Stonewall National Museum & Archives, which has a rich history of LGBTQ memorabilia ranging from old movies, historic books, props gifted by gay celebrities and even a first hand copy of an Oscar Wilde novel. They host a variety of events such as a “Gay Jewish Film Series”, fundraisers and exhibitions such as a celebration of Club Culture Personalities.

The second museum to check out is the World AIDS Museum. This is the first museum in the world dedicated to HIV/AIDS. It features a fascinating timeline of the evolution and impact of the virus, including what is being done to control and stop it.

5. Hang out at one of the gay beaches

There are many long white sandy beaches in Fort Lauderdale, which is what the city was traditionally famous for. Although there is no official designated “gay” beach, these are the ones which are unofficially known to be popular gay hangouts:

Previous Post: « Does This Tweet Mean Anthony Rapp & Wilson Cruz Will Find Each Other In Season 2 Of ‘Star Trek: Discovery’?
Next Post: Newsom Comes Out Swinging On Day One For Single-Payer, Immigrant Coverage »