Roman Bashinsky is “sad” that his series of same-sex kisses in a YouTube video have been banned in Russia says Gay Star News.

Bashinsky launched his social justice channel Bashinsky Time (BT) to help promote tolerance of LGBT lives in Russia and has more than 438,000 subscribers.

Bashinsky uploaded the video onto YouTube and other social media platforms Monday where it’s been viewed over 100 thousand times. 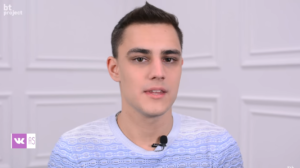 less than 24 hours later, YouTube removed the video on its Russian site.

The video does not violate the rules of YouTube.

But Bashinsky wants the rest of the world to share them to raise awareness of homophobia in Russia.