Timothée Chalamet either went for it or he ripped off Adam Rippon who wore a harness over his tux to the Oscars in 2018 causing quite the hubbub. 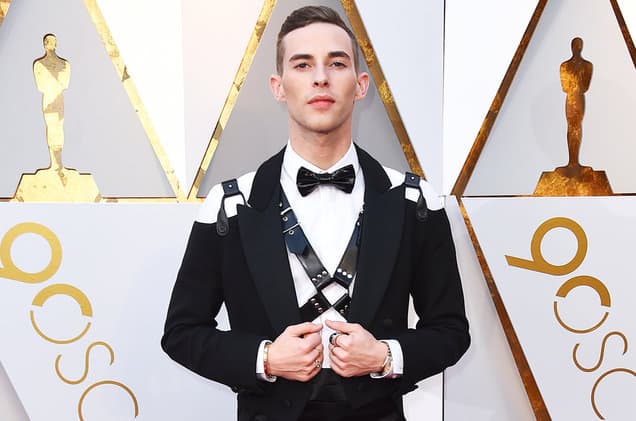 ABOVE: Who wore it best? Adam Rippon at the 2018 Academy Awards.

According to People magazine “The actor hit the red carpet wearing a custom, sequin harness from Louis Vuitton with an embroidered bib, paired with a shirt, pants and boots from the designer, the team behind the look told People. The harness has black iridescent and purple beads, plus seven different shades of sequins — and a hidden pocket for Chalamet’s phone!”

He finished off the look with four bracelets, two rings and cufflinks from Cartier.

The 23-year-old star walked the red carpet with his mom, Nicole Flender, who wore an open-back vest from Off-White c/o Virgil Abloh with matching wool pants. She and her son both wore clothing designed by Abloh, who was named the new men’s artistic director at Louis Vuitton in March.

Previous Post: « How Body Ideals Shape The Health Of Gay Men
Next Post: The Category Is: Red Carpet Realness! »