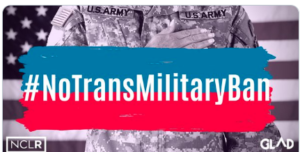 The U.S. Court of Appeals for the District of Columbia Circuit today ruled against transgender service members, lifting the district court’s order preventing the Trump administration from enforcing its ban on military service by transgender people in Doe v. Trump,” GLAD said in statement today.

#BREAKING: Today, the DC circuit lifted its court order preventing the enforcement of the #TransMilitaryBan.

BUT! This is only one case against the ban. There are still THREE(!) nationwide injunctions in place (including ours) from other courts. https://t.co/2K0KcWxuBE

“Today’s ruling is a devastating slap in the face to transgender service members who have proved their fitness to serve and their dedication to this country,” said NCLR Legal Director Shannon Minter. “We will keep fighting this cruel and irrational policy, which serves no purpose other than to weaken the military and punish transgender service members for their patriotism and service.”

“Today’s decision is based on the absurd idea that forcing transgender people to suppress who they are in order to serve is not a ban,” said GLAD Transgender Rights Project Director Jennifer Levi. “It ignores the reality of transgender people’s lives, with devastating consequences, and rests on a complete failure to understand who transgender people are. It is also destabilizing to the military to so dramatically reverse a policy that has been in place for over 2 years that senior military officials acknowledge has operated with no problems.”

Doe, the first legal challenge filed in opposition to Trump’s transgender military ban, was filed by the National Center for Lesbian Rights (NCLR) and GLBTQ Legal Advocates & Defenders (GLAD) and is one of their two lawsuits challenging the ban.

For more information, go to NCLR and GLAD’s website outlining the history and status of the Trump-Pence transgender military ban at https://notransmilitaryban.org/.

NCLR and GLAD have been at the center of the legal fight challenging the Trump-Pence transgender military ban since filing Doe v. Trump, the first of four cases filed against the ban, on August 9, 2017.