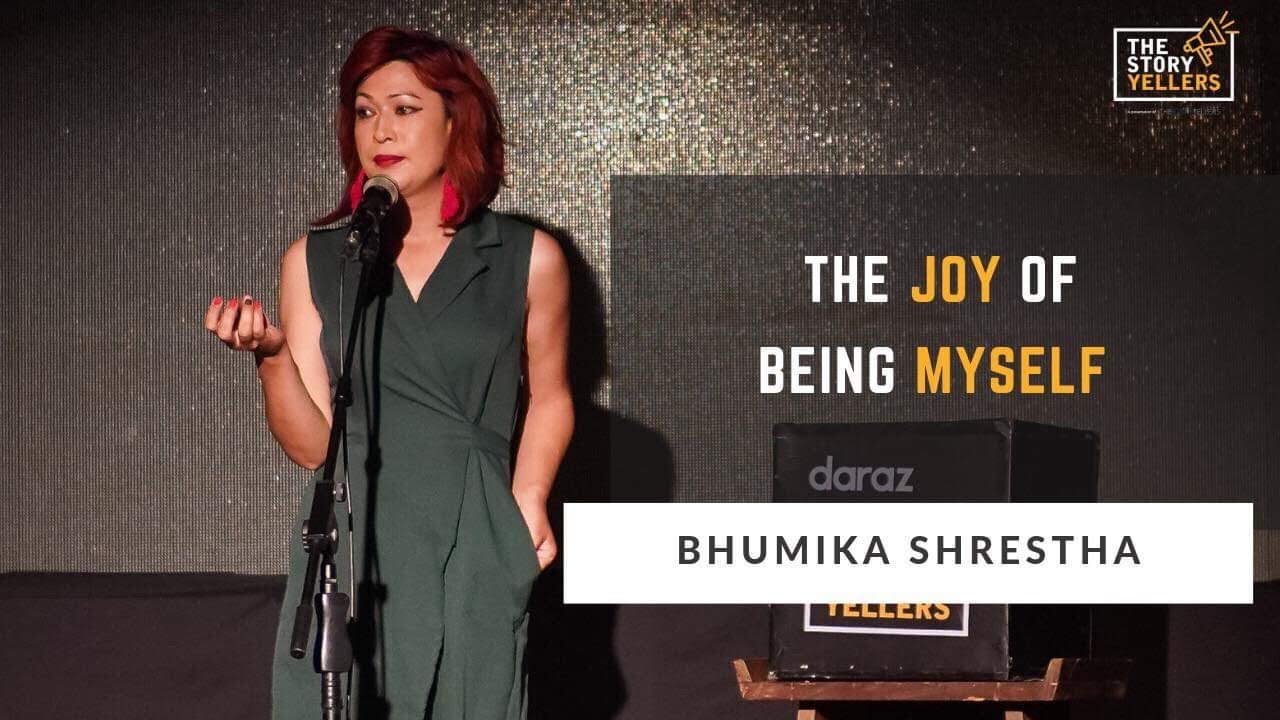 Bhumika Shrestha (Transgender Right Advocate & Activist):The Joy Of Being Myself: The StoryYellers

Bhumika Shrestha is an LGBTQ+ activist from Nepal who received the 2022 International Women of Courage (IWOC) Award from the US government. The award is given to women around the world who promote women’s rights and have shown leadership, courage, and willingness to sacrifice for others. For the last fifteen years, Shrestha has been working to address the challenges of the transgender community of Nepal. Whether it’s leading a conversation about queer citizenship rights with the government or fighting for dignity and rights, Bhumika Shrestha has been stepping forward as a change agent since 2007.

Born as a boy
Shrestha was born as a boy in a middle-class family in Nepal. Despite being assigned male at birth, she always felt like a girl since childhood. Trapped between her body and soul, she faced a lot of criticism for her feminine characteristics. In 2019 she talked about these early challenges in a video for the Storytellers community:

She was [1] (excerpt translated from Nepali) “told to cut her hair short, sit with the boys, talk in a hoarse voice and tease the girls, which often confused her. She was constantly bullied, harassed and called names because of her feminine characteristics, which added to her mental trauma.”

However, Bhumika was lucky to have constant support from her family. In a recent interview with Nepali TV channel Kantipur, she said (excerpt translated from Nepali):

When I was a student, I used to be scared of light, I used to be intimidated and self-conscious about my appearance, I always had this fear that if I stepped out in the daytime people would bully me. I felt more comfortable going out at night as people would not see me or judge me for who I am.

She added her reaction about the award (translated from Nepali):

I am happy to receive this award. This award is not just pride for me or my community but for the whole nation. I have always been speaking up for the rights of other minority women such as Muslim women, women with disabilities, single women, marginalized women, and this award has given me further responsibilities. Moving forward, we all should raise our voices for each other’s issues; we may have different issues but I believe we should equally speak up for each other. I am committed to speaking up for other minority women and for women’s rights in general.

Shrestha is fighting for equal citizenship rights for her community. In the interview above, she mentioned that, in Nepal, the government requires a health certificate to issue a citizenship certificate for transgender people. Bhumika and her organization are advocating that the government should respect the privacy of LGBTQ+ people and give them citizenship cards for whatever gender they identify as.

The Blue Diamond Society Organization is a nationwide LGBTQ+ Rights organization that was established in 2001 by Sunil Babu Panta. Shrestha joined the organization in 2007, and she has not stopped advocating for the rights of her community since then.

Shrestha, along with her organization BDS, advocates for and leads the discussion of the issues of health and HIV AIDS awareness and prevention, policy reform in governance, human rights, employment and career opportunities, and media and culture representation for LGBTQ+ people of Nepal. The organization has more than 500 members countrywide and currently operates in 40 municipalities in seven provinces of Nepal.

Widespread recognition
The US Embassy in Nepal shared this news on March 9, 2022. US ambassador to Nepal Randy Berry congratulated Shrestha on Twitter:

I’m thrilled to congratulate transgender rights activist Bhumika Shrestha, who will receive the @StateDept’s Int’l #WomenofCourage Award for her dedication to the LGBTQI+ community in Nepal! This is the 2nd year in a row that a Nepali will win this prestigious award. #IWD2022 [15] pic.twitter.com/w6FVcP911U [16]

Transgender rights activist Bhumika Shrestha, who will receive the Int’l Women of Courage Award from US government for her dedication to the LGBTQI community in Nepal! Congratulations Bhumika for your campaign and struggle and for the prestigious award. #IWD2022

Rights of the LGBTQ+ community in Nepal

While many parts of the world still criminalize homosexuality, Nepal has made some notable progress ] when it comes to the acceptance of the LGBTQ+ community. After the relentless advocacy efforts of BDS and other queer rights organizations, Nepal’s constitution protected the rights of LGBTQ+ people by legalizing homosexuality in December 2007. Further, in 2015 the constitution was reformed to include the right to receive a citizenship certificate under the ‘others’ gender category for the LGBTQ+ community. Also, in 2021, Nepal was supposed to include LGBTQ+ people in the census for the first time; however, it is reported that the census did not recognize LGBTQ+ members.

Unfortunately, they are still heavily impacted by the attitude and beliefs of Nepali society. There are less than a handful of people in the positions at the advocacy level, and that is still too few to protect their rights. There is no representation of LGBTQ+ people at the policymaking level, in health, or in education, and there are no employment opportunities for the community.

The legalization of same-sex marriage is another major challenge for the LGBTQ+ community people. LGBTQ+ activists have advocated for it and submitted their demands to the government, but it’s still far from happening.

People from the LGBTQ+ community are often victims of discrimination, violence and other forms of abuse by their own family and society. In November 2020, a transgender man was verbally abused and discriminated against in the street in Kathmandu. Many LGBTQ+ activists and social influencers demanded justice on this issue. Another tragic incident followed in 2021, when a transgender woman was beaten up by some men, and the police then arrested the victim instead of the abuser. She was taken to custody and beaten up again by the police.

The pandemic has been taking a toll on the population in the world and Nepal is no exception. Struck by a brutal economic crisis due to COVID-19, the health, economy, education, and other sectors are facing massive setbacks in Nepal. However, the LGBTQ+ community is at more risk and the government still discount their rights. For years they have been feared, separated, isolated, mistreated, ridiculed, put on display and exploited, denied their basic rights, or even killed just for being different. The LGBTQ+ community demands an inclusive and safe environment for them.

Shrestha is the second woman to win this award. Last year the IWOC was awarded to the acid attack survivor Muskan Khatun . An acid attack is a form of violent assault, involving throwing acid or a similar corrosive substance onto the body of a person, especially on women, with the intention to disfigure and inflict shame on them and ostracize them from society. Muskan advocated to the government, policymakers and stakeholders to protect other acid attack victims and make stronger laws against acid throwing.