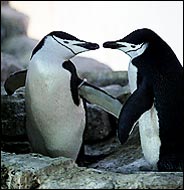 Surprise, surprise. An interesting New York Times article on gay sex among animals — The Love That Dare Not Squeak Its Name:

“Roy and Silo, two chinstrap penguins at the Central Park Zoo in Manhattan, are completely devoted to each other. For nearly six years now, they have been inseparable. They exhibit what in penguin parlance is called “ecstatic behavior”: that is, they entwine their necks, they vocalize to each other, they have sex. Silo and Roy are, to anthropomorphize a bit, gay penguins. When offered female companionship, they have adamantly refused it. And the females aren’t interested in them, either.”