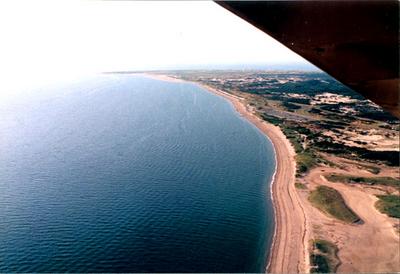 I’ve decided to observe Earth Day by posting a picture I shot of one of my favorite spots. This is looking down on Herring Cove Beach, the western facing beach in Provincetown. Those familiar with it will recognize the large parking lot in the distance. Due to their remoteness, parts of this beach are frequented by gay men with a proclivity for doing it in nature. There’s not much activity on the beach in the photo because I took it in the off-season, on May 15, on my birthday, from a single-propeller yellow vintage sightseeing plane that takes people for rides from the Provincetown airport. I think it still operates today, but this was ten years ago. George, a guy I was dating at the time took me up in it. Probably one of the most romantic days I’ve ever had.

John F. Kennedy protected 43,500 acres of land known as the Cape Cod National Seashore on August 6, 1961, along the Atlantic-facing edge of Cape Cod near the towns of Chatham, Orleans, Eastham, Wellfleet, Truro, and Provincetown. It’s still an ecologically fragile spit of land, formed as the result of glaciers during the Ice Age.

During the summer this beach is full of activity. During the winter, it’s deserted and snowy. I’ve walked down it in February and observed groups of seals running into the water on my approach, and epic pink sunsets over the snow-covered sand. It’s truly a magical place, and I’m happy to say this 4th of July will be my twelfth year there. Thank God for Kennedy, who had the foresight to protect this beautiful place from development.

When the great writer and thinker Henry David Thoreau came to Provincetown, he stood at Land’s End and said, “One may stand here and put all of America behind him.”