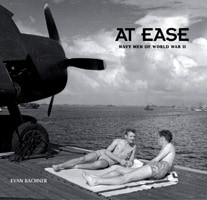 I was paging through Entertainment Weekly last night and came across a really hot photo of some shirtless Navy men (which I can’t find online) on a battleship hanging out in their underwear and doing gymnastics, and I thought to myself, this is the gayest thing I’ve seen in EW in some time. EW’s blurb described the book the photograph was from, At Ease : Navy Men of World War II, as a unique series of candids by Evan Bachner, A WWII historian.

“Unique” it is, and hats off to the queen working the book review section at EW for slipping this book in. After seeing the cover there’s no doubt of the homoerotic cast of Mr. Bachner’s eye. Wasn’t it nice when after an exhausting war soldiers were allowed to lay out on the deck of the ship together? I’ll have to say it sure is a far cry from the disgusting photographs of “post-conflict” soldier behavior we’re seeing on the news today.