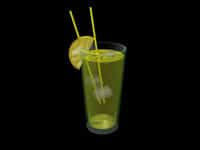 According to Ireland On-Line (where we go for only the most important breaking news), Esther served guests a drink called “Damn” at her Re-Invention launch party, made with gin, lemon-lime soda, and ice made only from pure Kabbalah water. What they neglect to mention is that the proper way to drink a Damn is alongside a shot composed of grain alcohol and Jagermeister called a Fuck. And what’s Kabbalah water? There’s a marketing opportunity here somewhere.