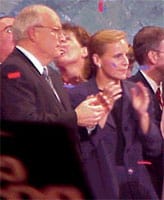 Dick Cheney’s flip-flopping reactions to the public acknowledgement of his lesbian daughter Mary shows that he is also willing to use her sexuality as a political tool, but in a more inconsistent and reprehensible manner.

First let’s ask the ethical question of whether or not a politician or a member of a politician’s family should be outed in the course of a campaign. It’s a question that’s rather moot in this case, because Mary Cheney is already out and has been publicly acknowledged as being a lesbian by her father in the past. However, I believe that when an elected official will have the power to affect millions of gay and lesbian citizens’ civil and human rights, their sexuality and the sexuality of members of their family is fair game.

And I’ll say again: Not that it matters here, of course, because Mary Cheney is already out of the closet. She has been out of the closet for years and even had a job at the Coors Brewing Company as a marketing liaison to the gay and lesbian community.

Following are the transcripts of the portions of the debates which are causing such a fuss:

“Well, Gwen, let me simply thank the senator for the kind words he said about my family and our daughter.  I appreciate that very much. “

“You saw a man who will do and say anything to get elected, and I am not just speaking as a father here, although I am a pretty angry father.”

Today the Cheney camp (both Dick and Lynne) are accusing Kerry/Edwards of using their daughter’s sexuality as a political pawn.

Guess what? Fair game. And Kerry/Edwards are at least being consistent in their references to her.

Cheney’s negative reaction to Kerry’s comments after his positive reaction to Edwards nearly a week earlier shows that Dick Cheney is willing to use his daughter in a far more deliberate way to incite hysteria and mislead voters away from the true issue here: that his running mate George W. Bush wants to write discrimination into the Constitution.

So don’t let the Cheneys’ attempts at mock-shock and disgust fool you. They’re now using their daughter as deliberately as she’s ever been used. I’m sure they love her. But I don’t think the Cheneys will be joining PFLAG anytime soon.