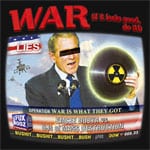 Here’s what the country voted for last night:

1. Another terrorist attack on U.S. soil
2. Further isolation of the U.S. in the world community
3. No gay marriage anytime soon
4. The possible overturning of Roe v. Wade
5. The Draft
6. A larger deficit that will collapse the economy
7. More loss of life due to lack of stem cell research
8. The loss in rank of the U.S. as leading innovator
9. An ultraconservative Supreme Court
10. Strife, uprising, and violence within our country
11. Very likely conflicts with Iran and North Korea
12. A stronger chance we’ll see the use of nuclear weapons
13. Fucking the environment
14. More death in Iraq
15. Further invasions of privacy and individual rights

This is just the tip of the iceberg. If you’re in any kind of minority group in this country, good luck to you. The U.S. has lost its place in the world. I don’t know what America Bush is living in, but perhaps this term he should start looking beyond the borders of his ranch in Texas and he’ll see how much we’ve lost, but I doubt that will happen. America is no longer a land of opportunity but a land of oppression. It’s a sad, sad day for this country.

Not sure how much longer I can continue to process this bad news. You’ll get some appropriately vapid content (including the Manhunt update) later today, as soon as I finish heaving into the toilet.