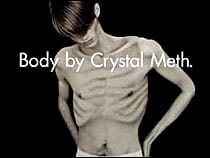 This piece in the Washington Post is perhaps one of the most useless and ignorant pieces of “journalism” I’ve read in a long time.

While I agree that crystal meth use combined with unprotected sex among a segment of the gay community is an enormous, frightening, and complex issue for gays, and something needs to be done, I have found myself asking this more general question in the past when certain folks have brought up the often unconventional sex habits of the gay community:

How can a society condemn “unconventional” sexual practices among gays when they refuse to recognize the validity of committed relationships within our community by allowing us the same social and legal benefits to which heterosexuals are entitled?

And if part of what leads gay men to engage in risky sexual behavior are self-esteem issues and desire for acceptance (both of which are known to be “satisfied” by using crystal meth), then wouldn’t the acceptance of gays as more than second-class citizens give a great lift to the community’s self esteem in general when families, friends, and employers begin to exhibit a greater tolerance and openness toward homosexuality as a result? And might this new acceptance trickle down to affect some of the reasons certain gay men have risky sex in the first place?

Richard Cohen of the WP needs to get off of his high horse and offer some solutions rather than issue a blanket condemnation of a community he only seems to fully understand through the writings of others.