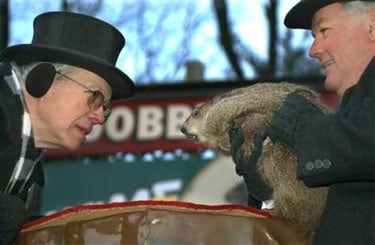 Punxsutawney Phil predicted six more weeks of winter this morning, but Conservatives had more on their minds when pulling him from his hole than determining whether or not the groundhog would see his shadow. You see, Phil has been living alone well into adulthood, which means there’s a good possibility he could be a threat to traditional marriage, and possibly homosexual.

If so, Groundhog Day would need to be reevaluated and possibly pulled from the calendar altogether.

They acknowledged that there was no way to determine, just by looking at him, whether or not he was gay — though with a name like Phil you never know.