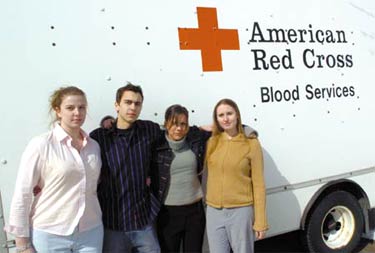 Students at the University of New Hampshire are taking a firmer stand against the Red Cross policy of banning gay blood donations. Student Nick Christiansen took the lead on this protest after hearing that some of his friends could not donate blood: “When I looked up the science, it did not back up the claim. There is such a need for blood right now. I feel society would be better served if they (gays) were allowed to donate. Is this about safe sex, or is this about being gay?”

The Red Cross ban says that even if a gay man has had sexual contact with another man only once since 1977, he is banned from donating for life. The ban does nothing to restrict those heterosexuals who may have engaged in risky sexual behavior. Article.