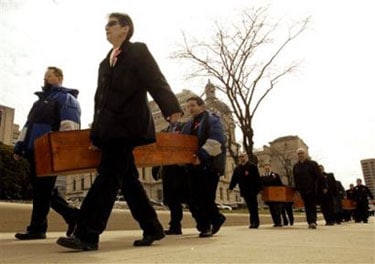 House Judiciary Committee members in Indiana voted 9-3 Monday to send the constitutional amendment banning gay marriage to the full house. After being ordered to remain silent, two people were escorted from the chambers as opponents cried “shame, shame” while the affirmative votes were counted. Later the group marched around the Statehouse carrying four coffins they said were “symbolic of the ‘deadly’ impact of the amendment on economic progress, the equal protection clause of the constitution and the rights of thousands of gay Hoosiers.”