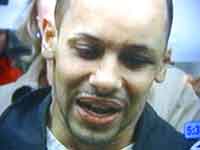 A 35-year-old gay man was attacked in the Bronx over the weekend by a gang of men shouting anti-gay slurs. Police have labeled it a hate crime and four teens were arrested. Nelson Torres (above), the victim, was just on the local Eyewitness News in Manhattan, and reported that it was a group of 16-20 men. Torres statement to his attackers: “I just wish you the best. I cannot hate anyone, no matter what.” Coincidentally, last week the body of Marvin Page, a gay man who worked as a drug counselor in Manhattan, was found stabbed to death in another Bronx apartment which had been set ablaze.