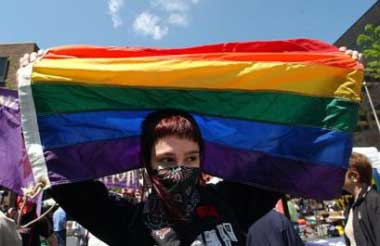 Over the weekend some major protests, both pro- and anti-gay, occurred across North America, with religion at the center of each of them.

EDMONTON: They’re not all that friendly up there. An outspoken Bishop is attempting to unite various religious groups against gay marriage. He brought together over 2,500 protesters over the weekend who feel threatened at the thought of gays receiving equal marriage rights. Bishop: “This is not a fascist statement … this is not anti-homosexual, but it is the Christian teaching on the primordial status of marriage and family life. An evil act remains an evil act whether it is committed in public or in private.”

PHILADELPHIA: The 2005 Equality Forum had as its centerpiece the marking of a civil rights demonstration that took place near Independence Hall in 1965, four years before the Stonewall riots. Nearby, Bishop Gene Robinson and defrocked Methodist minister Beth Stroud (who was reinstated by a Methodist court last week) spoke out at Christ Church. Stroud: “Other faith traditions out there have tried to shut us down and tell us we’re not worthy. I pray for a day when no one will experience discrimination.” The ’65 civil rights demonstration will be noted with a permanent marker this June.

COLORADO SPRINGS: Over 500 people protested outside the headquarters of Focus on the Family to object to that group’s campaign against gay rights and same-sex marriage. The protest took place amidst snow showers and was led by Mel White of Soulforce, an interfaith organization. White called Focus a “toxic religion zone.” Focus on the Family insists that homosexuality flies in the face of religious scripture and that people are not born that way but rather choose it. Mel White: “We are here to say, Jim, we love you enough to stop you from doing the damage you are doing to families across the nation.”

We have our current government and the religious zealots it courts to blame for the fact that matters of religion and faith are no longer private matters of choice for individuals. It disgusts me that one person’s interpretation of scripture can affect the basic human rights of millions of others.

Despite the fact that it’s wrong in the first place to mix religion and civil rights, since there’s no right answer and will never be a right answer to how scripture is interpreted, the unfortunate truth is that the person with the loudest voice is going to be heard.

Unfortunately right now, it seems like the haters are screaming the loudest.