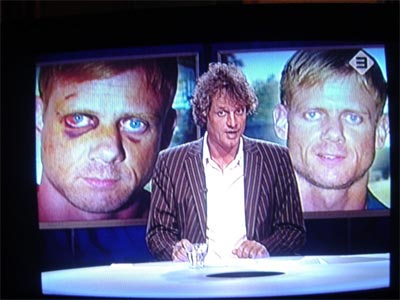 Window Media Editorial Director Chris Crain, who was severely beaten in a hate crime on Queens Day in Amsterdam by a group of Moroccan assailants, speaks to host Jeroen Pauw on the news program Nova on the Netherlands’ Channel 3 in these photos, provided to Towleroad by music blogger Arjan, who is spending time there this week. Crain was walking hand-in-hand with his boyfriend when a man spat in his face. When Crain confronted the man, who then said something about “fucking fags”, he was jumped by a group of five others Crain described as Moroccan. 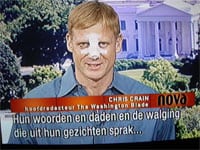 The bashing has sent Amsterdam, which depends heavily on revenue it generates by promising itself as the world’s most gay-friendly destination, into a crisis. Amsterdam’s Mayor Job Cohen, Arjan reports, promised to track down Crain’s attackers and is intent that the incident not damage the city’s reputation as one of the most progressive in Europe (or cause it to lost valuable ‘pink’ tourist dollars to alternate gay favorites Paris and Barcelona). Says Arjan, “The media and the people of the Netherlands are embarrassed and disgusted by this bloody act of aggression.”

There has also been much discussion of the fact that the attackers were Moroccan, and the culture wars that have erupted in that city, which Crain himself discusses here. In any case, Amsterdam is still probably safer for gays than other major cities, though Expatica, a news source for expats in the Netherlands, reports that “a survey by gay lobby group COC has found that one in three gays no longer dare to walk hand-in-hand in the city centre.”
(thanks Arjan)