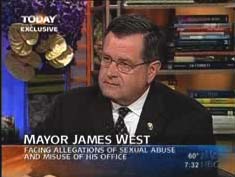 No major revelations from Matt Lauer’s frank Today Show interview with Spokane Mayor James West, accused of molesting underage boys and offering city jobs to men he met on Gay.com. West has a broad anti-gay political record and justifies it as what his constituents wanted.

West avoids answering the question of how he characterizes himself sexually even though he gave the Spokesman Review conflicting statements: that he’s being destroyed because he’s a gay man and that he wouldn’t characterize himself as gay. So he’s basically characterized himself as a self-hating homosexual.

Full clip at Crooks and Liars