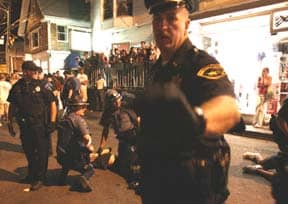 Provincetown’s 4th of July fireworks celebration turned ugly last week, as outnumbered police struggled to deal with three simultaneous outbreaks of violence. Witnesses reported “overzealousness” in the police force’s response to some of the brawls, which were said to have been triggered by heavy drinking. The town’s population swells over the Fourth of July holiday as tourists from the upper Cape flood the heavily gay-populated destination.

Note: I personally saw one guy arrested for assault in front of Spiritus pizza after the cops tracked him down, but didn’t see any of the fighting. Most of the “fights” I see in Provincetown occur between straight guys.