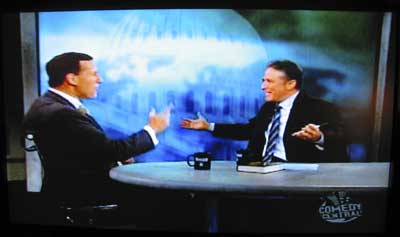 Last night The Daily Show with Jon Stewart hosted homophobe U.S. Senator Rick Santorum as he made the rounds publicizing his new book It Takes a Family: Conservatism and the Common Good.

Stewart seemed stymied by Santorum’s family values talking points. I don’t think I’ve ever seen Stewart having such difficulty coming up with rebuttals. By the end of their interview it seemed to be turning into a virtual lovefest, with the two of them agreeing to disagree. Here’s a partial transcript of the first half of the show which dealt with homosexuality and same-sex families:

Stewart: Can you confuse virtue with heterosexuality? Because I live in New York City. I’m literally – we’re in a sea of homosexuality here. (Santorum giggles) It is – and also evangelism and Jewish and Muslim — it’s New York. There’s 8 million people. You’ve got more of everything. My experience has been virtue is unrelated to sexuality. APPLAUSE. And by the way on the other side of that…unrelated to religion. I think that’s why the argument and concern in that vein is so confusing.

Santorum: I would say that certainly people who are homosexuals can be virtuous and very often are. The problem is that when you talk about he institution of marriage as the foundation and building block of society which I say the family is, and the marriage is the glue that holds the family together. We need to do things to make sure that that institution stays stable for the benefit of children.

Stewart: Children are best raised in male/female is what you’re…

Santorum: Yeah, one man one woman.

Santorum: Absolutely…I mean I talked about all those aspects of society…

Stewart: But if you don’t have the ideal? Cause you know they say you go to war with the army that you have…

Santorum: But government should be for the ideal [note: This is straight out of Bush’s rhetoric – remember this interview?] — that doesn’t mean that a single mom can’t and in most cases will raise great children. That [doesn’t] mean that other forms can’t and won’t raise good children. What government should be for is what’s best because a lot’s at stake – the future of our country. And so we should have a system that builds around what’s best, and that’s the traditional, what I call natural family. It’s not to say that other people are bad.

Stewart: Isn’t even the natural family evolving? All the way up until the 60’s and 70’s there were those head of household laws that a family could decide to move but it was basically the man who had final say, you know, and before that marriage was more a property arrangement. You know, love marriage only came in the 1700’s and moved on from there. Is it possible that, through an examination or as we go along, or is this just a basic difference of opinion about what the nature of sexuality is and what the nature of virtue is?

Santorum: No I think it’s the nature of what’s best for society. From four thousand years of history we’ve decided and determined that marriage awas so important, having a mother and father who had children who were together for the purpose of children. Remember, the reason societies elevate marriage to a special status is not because they want to affirm the relationship between two adults. That’s important. A love relationship is important.

Stewart: But isn’t that more a religious paradigm than..

Santorum: No, no. Again, what’s society’s purpose in marriage? Society’s purpose – the reasons civilizations have held up marriage is because they want to establish and support and secure the relationship that is in the best interest of the future of the society, which is, a man and a woman having children and providing the stability for those children to be raised in the future.

Stewart: Wouldn’t you say though and with that same thing and I completely agree, although I always thought the purpose of marriage was a bachelor party but that’s beside the point. (laughter) But wouldn’t you say that society has an interest in understanding that the homosexual community also wants to form those same bonds and raise children and wouldn’t a monogamous, good-hearted, virtuous homosexual couple be in society’s best interest raising a child rather than a heterosexual couple with adultery, with alcohol issues, with other things, and by the way, I don’t even need to make that sound as though a gay couple can only raise a child given failures in other couples.

Santorum: If it’s best case best case, the best case everywhere is one man, one woman, their child, raising that child.

Stewart: Can you legislate an ideal? [next words inaudible]

Santorum: We have to. We owe it to children. Children need a mom and a dad. There are differences between mothers and fathers. And young girls and young boys need both.

Stewart: I would, okay. (pause – laughter)

Santorum: I don’t think it’s dismissing the potential. I think we should honor every person in America – that every person has worth and dignity. There’s a difference though, when it comes to changing the laws of the country, that could harm children.

I was hoping for a few more fireworks from this match-up. I did, however, like the cutaway to the gay wedding when the show went to break.

Video at Crooks and Liars. 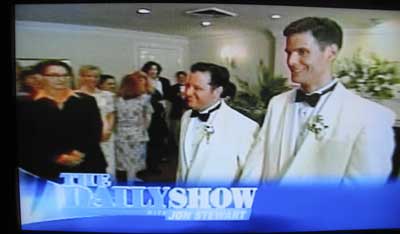