Wow. I’m sorry for the depressing previous post but this one just breaks my heart. I just received an email from a reader directing me to a blog and then an Iranian website that’s in Farsi, so I have no idea if this information is accurate or not, but if it is, it’s absolutely chilling. [UPDATE at end of post]

The blogger writes, “I just heard in the news about these two gay teenagers being hanged in public in city of Mashad, one of the northern cities in Iran. Apparently one of the guys was not even 18 years old. According to the article, they spent 14 months in prison and recieved many lashes. They had shown remorse for their action and had no idea getting engaged in homosexual acts will result in death!” 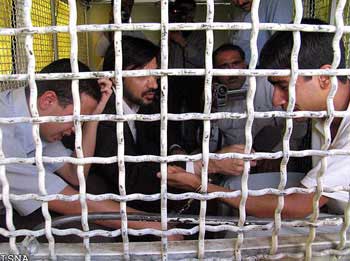 This story, if it’s true, and the images that follow after the jump, make everything I’ve written today seem so trivial. I know there’s a place for fun and games, but realizing the oppression and horrors that go on in other parts of the world can really put a perspective on things.

Two more images after the jump (warning: they are disturbing)… 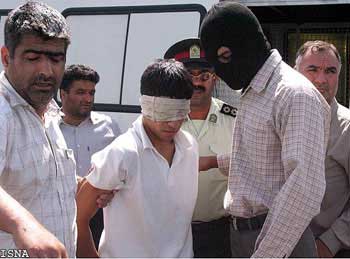 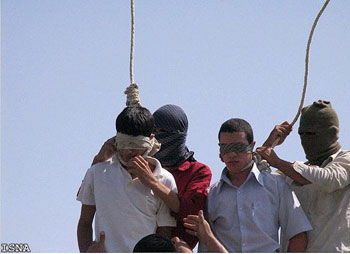 If anyone can confirm the content of the Farsi source article or find a news story in English regarding these young men, please email me.

UPDATE: Here’s one article, but it doesn’t mention the charges. (thanks Peter)

Okay, here’s another one that mentions the two were convicted of sexual assault on a 13-year-old boy. That sheds some ugly light on the story.

So it’s apparent that the two (one a minor himself) had committed a crime other than simply being homosexual themselves. But death? For minors? It leaves me with more questions. In a similar but heterosexual situation, would the youths have been hanged?

7/21 UPDATE: This new report suggests that “The allegation of sexual assault may either be a trumped up charge to undermine public sympathy for the youths, a frequent tactic by the Islamist regime in Iran. Or, Outrage! Suggests, it may be that the 13 year old was a willing participant but that Iranian law (like UK law) deems that no person of that age is capable of sexual consent and that therefore any sexual contact is automatically deemed in law to be a sex assault.” It also says that there are three other young gay Iranians being hunted by the police.