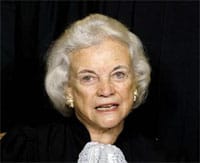 I found Deb Price’s summation of Justice Sandra Day O’Connor’s record on gay rights to be an insightful look at this swing vote we may be losing. The crux of O’Connor’s voting on gay issues seemed to be this: “She was torn between her traditional views — always writing of ‘homosexuals,’ not saying ‘gay Americans’ as some colleagues did — and her identification with the underdog.”

There is speculation (all too hopeful, I’m afraid) that O’Connor could be asked to come back as Chief Justice if Rehnquist decides to retire. However, since Bush seems inept at listening or taking advice from anyone but his inner circle, we’re most likely up for a long battle over conservative nominees.