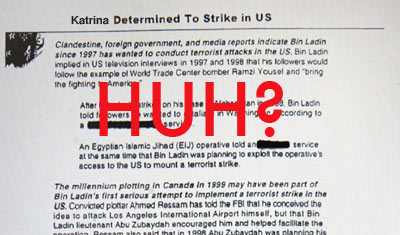 Sorry, just had to mock that up.

Even as it took aim at the Gulf Coast and meteorologists were declaring it the fourth most powerful hurricane ever to threaten the U.S., Bush was eating cake with John McCain.

As Katrina struck, Bush vacationed. Cafferty: “Based on his approval rating, based on the latest polls, my guess is Bush “to begin work” on Hurricane TODAY. He’s just been too busy finding more ways to rationalize this phony war.

WaPo: Bush approval numbers at all time low. “Gas prices stand to go even higher after Hurricane Katrina’s rampage through the oil-rich Gulf of Mexico.”

CNN: “Bush, who may visit the area later in the week, cut short his working vacation in Texas by two days — even though aides have long contended that his duties are uninterrupted when he spends time at his ranch in nearby Crawford, which has White House-level communications capability.”

It’s a relief he finally noticed that a big thunderstorm had damaged some homes — bet it looked pretty from the plane. But this paragraph begs the question, if Bush actually can do anything in Crawford that he can get done in the White House, as his aides have claimed, why did he need to cut his “vacation” short by two days? Perhaps his business with “Secretary of Clearing Brush” was finished.

And by the way, where the hell is the Democratic party?

What’s happening in the Gulf Coast sickens me, and the lack of federal leadership we’ve seen so far is astonishing.