Reuters: World stunned as US struggles with Katrina: “The world has watched amazed as the planet’s only superpower struggles with the aftermath of Hurricane Katrina, with some saying the chaos has exposed flaws and deep divisions in American society. World leaders and ordinary citizens have expressed sympathy with the people of the southern United States whose lives were devastated by the hurricane and the flooding that followed. But many have also been shocked by the images of disorder beamed around the world — looters roaming the debris-strewn streets and thousands of people gathered in New Orleans waiting for the authorities to provide food, water and other aid.”

Love this quote from an “unnamed White House official”: “‘Seventy-two hours into this, to be openly posturing about this, to be attacking the president, is not only despicable and wrong, it’s not politically smart,’ said one White House official who asked not to be named because he did not want to be seen as talking about the crisis in political terms. ‘Normal people at home understand that it’s not the president who’s responsible for this, it’s the hurricane. This will get better, hour by hour and day by day.'”

Of course it’s not politically smart — that’s obvious when you see people like FEMA head Michael Brown ass-kissing the White House by telling Katie Couric “people are getting the help they need.”

Not yet. Last night, “An exasperated-sounding Mayor C. Ray Nagin did not hold back his anger in an interview with a New Orleans radio station that ended with sounds of the mayor and the interviewer in tears. ‘I keep hearing that this is coming, that is coming,” he said in reference to federal aid. “And my answer to that today is b.s. – where is the beef?'” 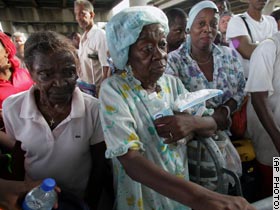 CNN: The Houston Astrodome in Texas, where thousands of refugees had been bused over the past couple of days, stopped accepting refugees late Thursday. Last week a grandma, this week a “refugee”. Tragic.

FEMA directing donations to Pat Robertson! Robertson’s “Operation Blessing” is on the list of organizations following the Red Cross. “Operations Blessing’s chairman, ‘MG Robertson,’ is none other than the Rev. Pat — Marion Gordon Robertson is his real name — while Pat’s wife DeDe is vice president and son Gordon Robertson is also on the board. The front operation for the radical, pro-assassination televangelist and Republican power broker is also based in the Rev. Pat’s headquarters, Virginia Beach.”

House Speaker Dennis Hastert retreats on controversial comments about the practicality of rebuilding the City of New Orleans. “I am not advocating that the city be abandoned or relocated. … It is important that when we rebuild this historic city that we consider the safety of the citizens first.”

Bush on relief efforts: “the results are not acceptable…We’ll get on top of this situation and we’re going to help the people that need help.” Leaves White House to tour Gulf Coast region.

“I don’t think anybody anticipated the breach of the levees.” 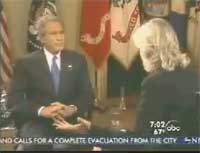 Bush to Sawyer on Good Morning America: “I don’t think anybody anticipated the breach of the levees.”

Actually (as posted below), “In 2001, FEMA warned that a hurricane striking New Orleans was one of the three most likely disasters in the U.S. But the Bush administration cut New Orleans flood control funding by 44 percent to pay for the Iraq war…

…A year ago the U.S. Army Corps of Engineers proposed to study how New Orleans could be protected from a catastrophic hurricane, but the Bush administration ordered that the research not be undertaken.”

Even Saturday Night Live‘s Mr. Bill knew there was a problem with the levees.

I’m not saying it’s directly Bush’s fault here that the levees were not fixed, but don’t go on national television and blatantly lie to the American people when there is just loads of evidence out there. Seems the only time Bush ever likes to take responsibility for anything is when it’s time to hang a “Mission Accomplished” sign up, and given Bush’s timing on such congratulations, it’s about time to hang one on the Superdome. 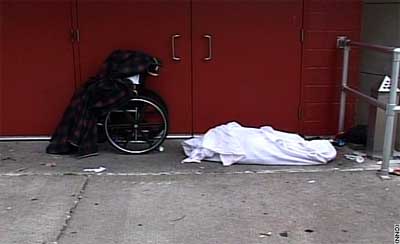 A blanket covers the body of a woman who died in a wheelchair, and another body is wrapped in a sheet Thursday at the convention center in New Orleans.

Aid from Canada being blocked by Homeland Security: “Canadian agencies are saying that foreign aid is probably not being permitted into Louisiana and Mississippi because of ‘mass confusion’ at the U.S. federal level in the wake of the storm.”

CNN: FEMA and Cst Grd suspending some operations due to gunfire…

Not in my job description: Condi Rice laughs it up at Monty Python farce, goes shopping for shoes: “A fellow shopper, unable to fathom the absurdity of Rice’s timing, went up to the Secretary and reportedly shouted, “How dare you shop for shoes while thousands are dying and homeless!” Never one to have her fashion choices questioned, Rice had security PHYSICALLY REMOVE the woman.”

“No One Can Say they Didn’t See it Coming” 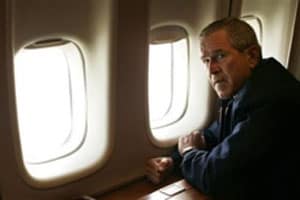 Yesterday, as he surveyed Katrina’s destruction from Air Force One, Bush reportedly declared, “It’s devastating. It’s got to be doubly devastating on the ground.”

“In 2001, FEMA warned that a hurricane striking New Orleans was one of the three most likely disasters in the U.S. But the Bush administration cut New Orleans flood control funding by 44 percent to pay for the Iraq war…

…A year ago the U.S. Army Corps of Engineers proposed to study how New Orleans could be protected from a catastrophic hurricane, but the Bush administration ordered that the research not be undertaken.”

National Guard military policeman stationed outside of Superdome: “This is mass chaos. To tell you the truth, I’d rather be in Iraq. You got your constant danger, but I had something to protect myself. [And] three meals a day. Communications. A plan. Here, they had no plan.”

Crooks and Liars: “Anderson Cooper was visibly upset today by the fact that ‘person after person’ came up to him asking why the federal government hasn’t shown up to help out yet.” Video.