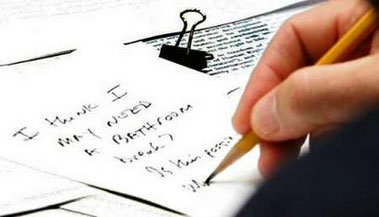 I wasn’t aware the President had to ask the Secretary of State permission for a bathroom break. The combination of caption and photo here is just genius.

“U.S. President George W. Bush writes a note to Secretary of State Condoleezza Rice during a Security Council meeting at the 2005 World Summit and 60th General Assembly of the United Nations in New York September 14, 2005. World leaders are exploring ways to revitalize the United Nations at a summit on Wednesday but their blueprint falls short of Secretary-General Kofi Annan’s vision of freedom from want, persecution and war.”