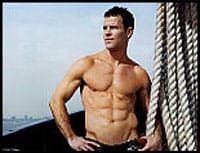 NYDN Widdicombe: Days numbered for FDNY beefcake calendar. “Its official name is the ‘Calendar of Heroes,’ and the thinking is that these shirtless calendars aren’t an appropriate way to present heroes.”

Former Texas inmate convicted on petty theft details prison abuse and rape at hands of other inmates. “Johnson told the court that the gang forced him to wear women’s makeup. He said on one occasion when he appeared before a prison official the man made a gay slur because of the makeup. Another official said that the lipstick and eyeliner was a sign of promiscuity and said that Johnson had brought the rapes on himself. In yet another example an official told him to get a boyfriend for protection.”

Paddy Nhlapo and Richard Yell, two South African gay men with HIV, have reached the summit of Mount Kilimanjaro and may be qualified to enter Guinness Book of World Records as the first inidividuals living with AIDS to make the ascent.

UK report: Same-sex home-buying soars. “Gay couples will definitely become more identifiable with the added protection the Civil Partnerships Act is likely to engender. It’s not that they didn’t buy houses together before, but that they won’t be so reluctant to reveal to their lawyer that they’re a couple.”