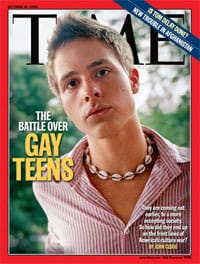 Time magazine covers gay teens in their current issue, focusing on the battle between groups promoting tolerance such as PFLAG and GLSEN, and Christian groups that seek to sway kids away from homosexuality.

The school is the new battleground and gay-straight alliances have conservatives worried. They realize that today’s teens are more enlightened about sexuality and this enlightenment will ultimately lead to changes in legislation that give gays equal rights as the teenagers reach voting age.

Mathew Staver, president of Liberty Counsel, an influential conservative litigation group that earlier this year won a court order blocking a Montgomery County, Md., teachers’ guide that disparaged Evangelicals for their views on gays: “They”–gay activists–“know if they make enough inroads into [schools], the same-sex-marriage battle will be moot.”

According to Time, a UCLA survey showed that 57% of college freshmen favor same-sex marriage. It’s numbers like these that have conservatives pulling out their newest weapon: the (so-called) ex-gays. They’re hoping to take advantage of the often “murky” sexual identifications of teenagers by telling them they can change the course of their sexuality with “healing.”

Time talks to 26-year-old Chad Thompson, founder of inqueery.org, a site that from all appearances looks to be a support site for gay teens but upon closer inspection reveals its intentions as a Christian forum dedicated to the rejection of homosexuality. This is what Thompson preaches, yet even he seems to have failed his own course in miracles:

“Still, Thompson never accepted a gay identity–“Heterosexuality is God’s design,” he says–and today he is a leading spokesman for young Christians rejecting homosexuality. Thompson says a new kind of bigotry has emerged–among gays. “Those of us who have chosen not to embrace this orientation are often misunderstood and sometimes even ridiculed,” he writes in a pamphlet he distributes at campus speaking engagements. Thompson, who has written a book with the near parodic title Loving Homosexuals as Jesus Would, hasn’t been completely successful in rejecting his gay desires. He admits he still notices handsome men and says, as though he had an internal Geiger counter, “My attractions are probably about 1% of what they used to be.”

The bigotry of gays against ex-gays? It’s an interesting argument, and one that might hold up better if there weren’t so many ex-gays that claim to still have homosexual tendencies.

The article also focuses on the Point Foundation and their scholarship programs for gay youth, which have facilitated scholarship for 47 kids across the country. Over 5,000 have applied.

Among the challenges for groups like the Point Foundation (and the article is quick to point out that the Christian ministries have done a better job at identifying the crux of these challenges) is trying to define the “post-gay” identity and its disassociation with politics and various segregated elements of gay culture. The Time article zeros in on the gift bags given to the kids at the retreat which included, among other things:

A 9 ½-oz. jar of American Spoon Sour Cherry Preserves •A Fujifilm QuickSnap Flash camera •A small tin of Trendy Mints from Henri Bendel, New York City •A DVD of the 2001 film Hedwig and the Angry Inch, in which a teenage boy is masturbated by an adult •The Harbor Springs Visitors Guide •The Aug. 16 issue of the gay magazine the Advocate, whose cover featured a shirtless man and blared, SUMMER SEX ISSUE.

Time‘s writer, John Cloud, may be reading too much into the gift bag’s contents, but does have a salient point:

“But when I opened my gift bag, it occurred to me that gay adults are still figuring out how to deal with gay kids. The gay subculture, after all, had been an almost exclusively adult preserve until the relatively recent phenomena of gay adoption and out teens. Point scholar and Emory College junior Bryan Olsen, who turned 21 in August and has been out since he was 15, told me during the retreat, “It probably sounds anti-gay, but I think there are very few age-appropriate gay activities for a 14-, 15-year-old. There’s no roller skating, bowling or any of that kind of thing … It’s Internet, gay porn, gay chats.”

The identity of gay teens is less centered around their sexuality than ever before, and certain Christian groups are taking advantage of the “empty” aspects of gay culture (or perhaps, the empty aspects of any culture) — “gays’ supposed promiscuity and intemperance” — and running with them.

What the article really provides is a look into how the more traditional notions of homosexuality are changing and the effect that it has on kids’ ability to come out. What these changes hold for the future of gay rights remains to be seen but it does appear that time is on our side, and after seeing what little success most ex-gays have had in actually changing their true feelings, it appears nature is as well.

The Battle Over Gay Teens [time]