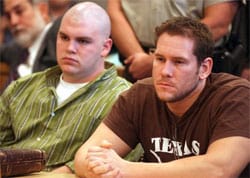 Two former University of Texas students sat in court while the victim they “repeatedly kicked and punched, prodded with swords, whipped with a vacuum cleaner cord, told to strip naked and sexually assaulted” because he was gay looked them in the eyes and called them cowards.

The attackers, Darren Gay (left) and Donald Bockman, said they did what they did because the victim allegedly made an advance toward Gay’s younger brother. They accepted plea bargains that did not allow prosecutors to go after them for hate crimes, which would have held stiffer penalties. They each got six years.

According to a police affadavit, Bockman had quoted the Book of Leviticus to the victim, saying to him that the Bible “says to put to death any man that lays with another man, and tonight we are passing judgment on you for being a faggot and a queer.”

The victim, who has remained unidentified throughout the trial, said to Bockman, “Like all religious fanatics, you pick and choose religious verses to fit your hatred and fit your crimes.”

There were four attackers. One has his day in court October 18th, while another was convicted and is currently serving a seven year sentence.