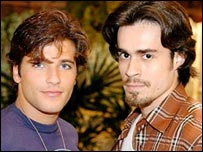 Screenwriter Gloria Perez claims the TV network Globo, cut the scene: “Marcos Schechtman [the director] and I made the scene – it was recorded. We fought for it and I cannot deny that I was frustrated that it wasn’t shown. The actors also were [frustrated]. After all, they had staged it with much enthusiasm. Even heterosexual men, who tend to be more conservative, wanted the kiss. Everyone wanted it. I was very happy about it because it showed that things were changing in Brazil.”

Actors Bruno Gagliasso and Erom Cordeiro were apparently as shocked as the viewers that the kiss didn’t air.

The network denies there was ever a gay kiss.

Brazil Denied First Gay TV Kiss [bbc]
The Non-Existent Gay Kiss: Who Gets the Blame? [made in brazil]

Previous Post: « Twilight at the Top of the Rock
Next Post: In Austin, a Showdown Between Protesters and the KKK »