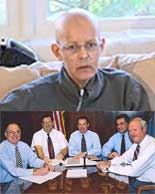 Twice over the last couple of weeks I’ve posted about Laurel Hester, a lesbian with terminal cancer that has spread from her lungs to her brain. If this battle weren’t great enough, she’s also been fighting a battle with the Ocean County Freeholders to be able to leave the pension she received as a police officer to her partner after she dies.

After resisting her requests for a year, (as well as the requests of her Republican ally Dane Wells), the Ocean County Freeholders have decided to extend benefits to same-sex partners. In recent weeks Hester’s battle had been taken up by bloggers and others who hoped that a grassroots movement might force the Freeholders to change their position. The pressure appears to have worked. May Laurel Hester now be able to live out the rest of her life in peace. Congratulations to Laurel, Dane Wells, and others who took up this fight.